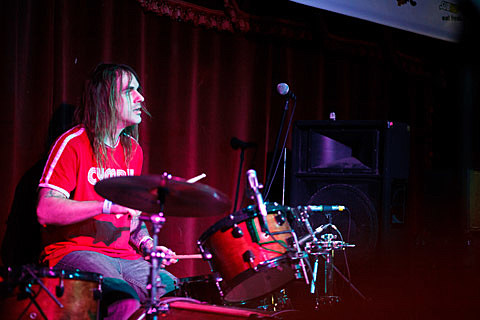 A perhaps surprising turn in the Kliph Scurlock Vs Wayne Coyne/Flaming Lips saga. For those who haven't been following this, Scurlock was let go from drumming duties in The Flaming Lips, and then released a statement claiming that he was fired by frontman Wayne Coyne after taking a stand against against Christina Fallin -- singer in band Pink Pony and daughter of Oklahoma Governor Mary Fallin --  who wore a native American headdress in a now-deleted photo on her Instagram. Coyne then fired back in a Rolling Stone interview, calling Scurlock a "compulsive, pathological liar" among other things.

Today (5/13), as noted by Stereogum, Scurlock wrote a long (very very long) post on his Facebook, saying he doesn't think Coyne is a racist, and that maybe he wasn't the best Flaming Lips team player. He wrote a lot. This chunk pretty much sums it up:

Anyway.....so, again, in all caps this time because it's true - WAYNE COYNE IS NOT A RACIST. And I can say that because I know him. And I wouldn't say it if it weren't true because above all else, I value truth, no matter how shitty it is. I've also gained a lot of perspective in the last several days about Wayne as a human being and myself as a human being. Watching Wayne get piled on and receive death threats has really freaked me out. We've butted heads over the years and he's done and said several things to me that I found unwarranted and borderline despicable and I thought I would enjoy watching him get his feet held to the fire when this stuff blew up. But I haven't. At all. And it's caused me to do a lot of deep thinking. And I see that I wasn't the perfect soldier in the band I painted myself to be (and thought I was.) There were lots of things I wasn't the least bit interested in - the Lipsha record, the Stone Roses cover album, the Sgt. Pepper cover album, working with Miley Cyrus, etc. - that I would just simply skate out of and not participate in. I operated under the delusion that it didn't matter (and it ultimately didn't. Those records got made or are getting made whether I'm around or not), but I can see how it might look to the other guys in the band and how it might cast doubts on my ultimate allegiance to said band.

And then closes with:

Scurlock also says that he's still a Flaming Lips fan and plans on buying their new records and seeing them live. You can read the whole thing below.

Meanwhile, Scurlock can be heard on Gruff Rhys' new solo album, American Interior and you may have seen him live with the Super Furry Animals frontman during SXSW (like at one of our BrooklynVegan day parties).

I just wanted to thank everybody for their support this last week or so as this whole soap opera has been made public. I do truly appreciate it more than I could ever put into words. It's all really weird to me. I'm not used to this kind of spotlight (and honestly feel ill suited to it). And to all the people that have written me that I haven't written back, I promise I will. Soon. But I also wanted to address some things that I have seen in all of this that I am uncomfortable with and some feelings I have surrounding all of it.
First off, I've read many people who have called me "brave" for releasing my "statement" to the public. There could not be a less accurate word than brave to describe what I did. I never intended for this stuff to be made public. But local press in Oklahoma City started picking up on it a little over a week ago and it was bubbling and gurgling from there. I reached out to a friend of mine who is an entertainment lawyer to advise me because I'm not used to dealing with this kind of stuff. He initially told me to just sit back and it would run its course. On Thursday, Gawker picked up on it and he advised me, at that point, that there was a 50/50 chance a more mainstream source might pick it up, but as it was all hearsay and conjecture at that point, it was hard to say. But he told me I should prepare a statement just in case. So, knowing I tend to ramble and phrase things in weird ways sometimes, I wrote a bunch of stuff Thursday night when I got home from the Temples show. My friend guessed that, if the story did go mainstream, it wouldn't have been until the beginning of this week at the earliest. So I figured I had all weekend to pick and poke at it and hone it down to something concise that said exactly what I wanted it to. Well, Friday afternoon rolls around and I'm sitting in my bedroom in my pajamas mixing a song and my phone starts beeping like crazy. I look at it and I'm getting several texts and I keep seeing the word "Pitchfork". So, I go check Pitchfork and there's the big headline, "Kliph Scurlock Accuses Wayne Coyne Of Racism", which is untrue. I never have and never will accuse Wayne of racism because I know he's not racist. And racism can kill careers. Just look at that NBA dude from last week. So, I freaked and put my unfinished, unedited "statement" up here on Facebook and sent it to Pitchfork. There were a lot of things that I would have taken out because I know how things get blown up and sensationalized and several things I would have clarified better and so on and so forth, but didn't feel I had a chance to before Pitchfork grabbed ahold of the story and I reacted. So, again, it was the exact opposite of bravery.

Second, some of the reactions I've seen to this over the weekend have been scary to me. I've been told that Wayne has gotten legitimate death threats over this which I just simply can't get my head around and absolutely don't condone. Even if he is racist (which I will go to the grave maintaining he isn't), threatening someone's life over it just doesn't seem like a valid response on any level. And I've seen a bunch of people saying that they're done with the Flaming Lips and will never buy another record or concert ticket. That to me is sad. I'm not done with that band. I will be buying the next record and surely the record after that and the record after that and so on. And I'm sure I will love them. And I will continue to love and cherish the previous records. And I want to see them live. The Flaming Lips put on an amazing live show. That's one of the reasons I fell so hard for them in the 1990s. But it's everyone's personal choice. I appreciate people taking a stand against something they see as wrong (which is something I do all the time), but if we all suddenly stopped listening to bands who had assholes in them, how small would our list of "approved" bands be? Well, you can forget about listening to the Beatles, whether solo or as a group. Captain Beefheart is out. So is Miles Davis, Led Zeppelin, The Rolling Stones, Frank Zappa, etc., etc., etc. And I'm not going to stop listening to those bands. Ever. I understand completely wanting to relate to the artists whose work you enjoy on a personal level. I am the same way. I can't begin to tell you how thrilling it was to me when I first started roadieing for the Lips and got to know the guys and found we had much in common and looked at a lot of things in the same way. It made my connection to their music deeper. But it's not necessary. I've never met a single member of the Beatles or the Rolling Stones and their music resonates with me as deeply as any music ever could. I've never met Miles Davis, but his trumpet playing at the end of "Great Expectations" brings tears to my eyes every time I hear it. And so on.

In closing, I do wish once more to sincerely thank everybody from the absolute bottom of my heart for the love and support I've been shown. But please don't make me out to be something I'm not. And please don't make Wayne (or the other guys in the band) out to be something he and they are not. After all, we're just humans, some of us with wives and children.
Your friend,
Kliph "TL;DR" Scurlock
7 May 2014