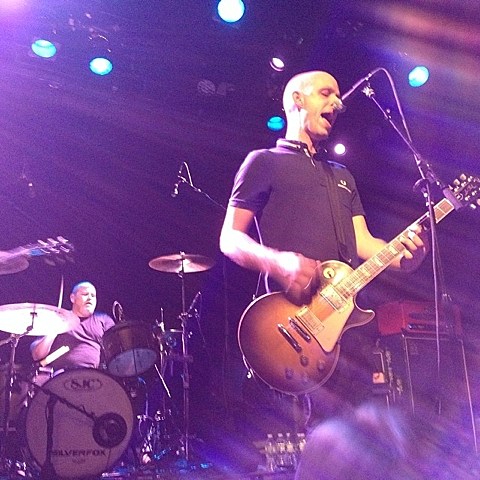 "It's not nostalgic, it's just fucking fun!" shouted Blair Sheehan before the last song of Knapsack's pre-encore set at Music Hall of Williamsburg last night (11/17), the final stop on their 2013 reunion tour. And from the constant choir of crowd voices singing along, fists in the air, mosh pits that broke out, and the great spirits Knapsack were in the entire show, he was absolutely right. It was their first time in NYC in over 15 years, having (as Blair mentioned on stage) last played Tramps in 1998 with Archers of Loaf, At the Drive-In, and Vehicle Birth. And while some bands who reunite would be better off leaving the past in the past, Knapsack were genuine, and put on a terrific show.

I never saw Knapsack during their initial run, so I can't compare anything to what it was like back when, but at last night's show they were a tight, vital band who looked like they had never called it quits. Of course that was likely due in part to the audience's endless enthusiasm. "If someone had told me in the '90s that we'd be doing this in 2013 and you would all come and give back, I would've said 'fuck you!'" said Blair (or something to that extent) on stage. The bulk of the crowd seemed like people who had literally waited years to finally see this band, or to finally see them again, and weren't shy about revealing they knew every single word.

Knapsack split their set between their three full length albums, relying most heavily on Day Three of My New Life and This Conversation Is Ending Starting Right Now, all of which came out before the turn of the millennium. But their wordy powerpop-infected emo still resonates today. Especially with bands like Title Fight, Joyce Manor, and the like bringing heart-on-your-sleeve power chords to increasingly larger audiences, songs like "Thursday Side of the Street," "Katherine the Grateful," "Please Shut Off the Lights" and just about the entirety of the set sound like they could have been released yesterday. Time has treated this band well.

Before the final song of the set, Blair said, "This may be the last song we ever play," and shouts of disappointment rang through the room, but soon quieted and the crowd went harder than they had all night, opening up the biggest pit of the show with multiple people running up on stage and diving into it. Afterwards, Blair high-fived the first row, everyone filtered out, and I don't think I saw a single face not smiling.

We also caught the tour's Chicago stop, and you can check out pictures on BV Chicago. A couple videos and the setlist from MHOW, below...

Knapsack at Music Hall of Williamsburg - 11/17/13 Setlist:
Thursday Side of the Street
Simple Favor
Hummingbirds
Shape of the Fear
Steeper Than We Thought
Change Is All the Rage
Arrows to the Action
Effortless
Courage Was Confused
Boxing Gloves
Skip the Details
Cellophane
Katherine the Grateful
Please Shut Off Lights