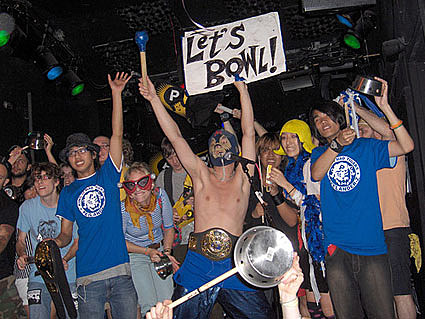 This week the New York club, the headquarters of a company that also includes a club in Los Angeles, won community board approval to begin moving into 361 Metropolitan Avenue in Williamsburg, Brooklyn, the former site of the Luna Lounge. In TriBeCa the Knitting Factory has three performances spaces, the largest holding 400 people, but in Brooklyn it will have only one room, for 300 or fewer. Two weeks ago "Knitting Factory Concert House" signs went up outside larger halls in Boise (capacity 1,000) and Spokane (1,500) that the company recently acquired.

"We don't have to be the biggest kids in New York City to be the Knitting Factory," Mr. Hoffman, 45, said in the Leonard Street front room one recent afternoon as a parade of tattooed young men lugged in the night's cargo of amplifiers. "What we do have to have is a pipeline that brings us the most exciting new music from the cities where the newest, most exciting new music is being created." [NY Times]