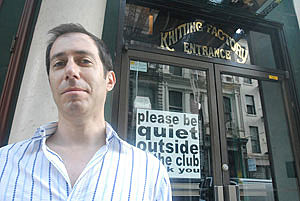 "People are expecting Tribeca to be as quiet as a suburban street in Greenwich, Connecticut," [KF owner Jared Hoffman (pictured)] added.

Ahn-Tuyet Pollock, who has lived next door to the Knitting Factory for eight years, said she [despite moving in after the club was already established there] and many of her neighbors have been waiting for the day that the club would close and the sidewalk be free of its patrons.

"It's been a struggle for us ever since we moved in," Pollock said. "[Club-goers] line up in front of the building, they smoke, they make all kinds of noise, they want to come into our building to use our bathroom...it's a nuisance."

Joe Rosales, a broker for Lee Odell Real Estate, closed on a $12 million sale of the six-story building at 74 Leonard Street to the Laboz Family Trust in July, and the space, he said, has already drawn interest from developers looking to install nother nightclub.

"The way that space is laid out, it has to stay commercial," Rosales said....

....When the Knitting Factory reopens in Williamsburg in March, it will have shrunk from three stages to one, and only about one-third of its current staff. However, it will only be paying about half the rent. The cheaper digs, he said, will allow the club to retain its status as a breeding ground for new and undiscovered talent.

"In a lot of ways, Manhattan abandoned us," Hoffman said. "In a belated fashion, we're following our community. We're not meant to be a 1,000-person room trying to follow the same 90 tours that come through the city every year. We're meant to be finding the artists and giving them a platform." [Tribeca Tribune]