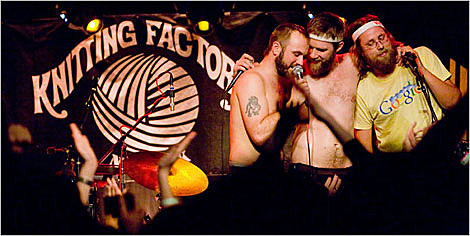 "It was a particularly cacophonous performance of "Auld Lang Syne." But for the Knitting Factory's last night in Manhattan, it was appropriate, as the shaggy avant-folk group Akron/Family led a version of the Scots New Year's hymn on Wednesday night that mutated from a simple singalong to screeching feedback to a meditative one-note drone." [NY TIMES]

The NYC club is closed, but that's not the last of "Knitting Factory". In addition to the locations in Hollywood, Boise and Spokane that are still open, Knitting Factory Brooklyn is supposedly opening in March. Knitting Factory is also currently promoting/presenting some shows at The Studio @ Webster Hall - two at least:

They are also presenting tours.

Browse the archives for memories. Leave yours in the comments.

Video from the Cro-Mags show there on Sunday, below...

+++The sound at this show was terrible. This video actually sounds better than the show itself.+++

Cro Mags covering the Bad Brains classic Banned in DC and shredding through Hard Times at the Knitting Factory in New York City on December 28 2008.
http://www.myspace.com/thecromags

Please note that this show was billed Cro-Mags, not Cro-Mags (Jam).