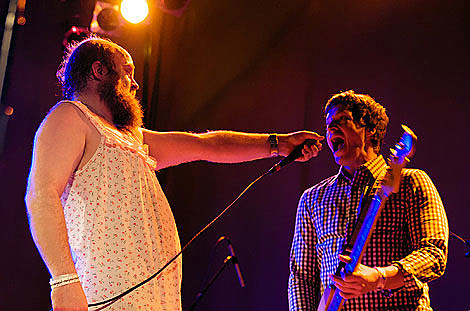 We've been waiting for this news since first finding out Knitting Factory was taking over the Brooklyn Luna Lounge lounge space in April 2008 (which was followed by official confirmation in July of the same year). Since then, Knitting Factory's Manhattan location closed and reopened (and closed again) and lots of people have been left wondering what the deal was.

The Titus Andronicus/So So Glos show (tickets) is the last date on a long tour that also includes a show at Maxwell's.

Melissa Auf der Maur plays KF on October 17th as part of the Royal Flush Film Festival which makes sense since she made a movie. Tickets for that event are on sale.

And tickets and dates to all of the above mentioned shows are HERE.

More about the space, HERE.

Tim Harrington apologizes to his mom, in the video below...