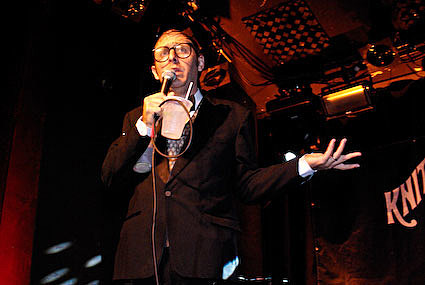 The days are officially numbered for Hollywood's Knitting Factory. The club, says a spokesman, will host its last show on Oct. 25, with pop-punk band Hit the Lights currently booked on the venue's final day.

Pop & Hiss reported in July that the Knitting Factory intended to leave its current location at 7021 Hollywood Blvd. at the end of October. The club's lease is up Oct. 31, and there were no last-minute changes of heart.

"We are definitely not staying here," says the club's head of promotion and publicity, Bruce Duff, via email.

The Knitting Factory's flier for its final Hollywood shows teases a new venue opening in 2010. Duff says nothing has yet been finalized on a new locale, although "several are in the running."
[LA Times]

Here in NY our Knitting Factory went through something similar with the location switching from Manhattan to Brooklyn where funnyman Neil Hamburger is performing on November 11th! JP Incorporated and Jonny Corndawg open the show. Tickets are on sale.