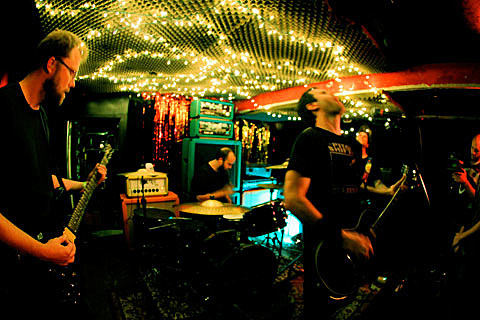 That sense of being packed into a city definitely had an influence on me personally. I don't dislike that feeling, but I was aware of it and I know it seeped into our lyrics. And lyrically things are a little different this time around, so maybe that's partly why. As for the space in the music, the more that we've explored that, the more it's spoken to us. It feels like we are figuring out the band that we're supposed to be. I can definitely hear that happening on Container Ships, especially compared to our previous record, Gambling on the Richter Scale, which was super blown out and aggressive and dense. I can totally draw a line from our first EP to this record as far as slowly firing ourselves into orbit. [Noisey]

Bummed-out sludge greats Kowloon Walled City are streaming their new album Grievances, which is out on October 9th on Neurot. That quote above is from an interview that Kowloon guitarist/vocalist Scott Evans just did with Converge guitarist and metal mega-producer Kurt Ballou. The whole thing is worth a read, especially for the true gear-heads out there; the two producers get way into the recording techniques used for the record, and its pretty fascinating.

As for Grievances, its a compelling new direction for KWC. Using a raw, newly clean-sounding guitar sound, these songs really breathe. There's such a strong command of dynamics, such directness in the way the band delivers emotional content, that the album feels like the most refined possible expression of what they've always done. Listen below.

Kowloon Walled City are heading out on a quick west coast tour with Fight Amp. Those dates are listed below.