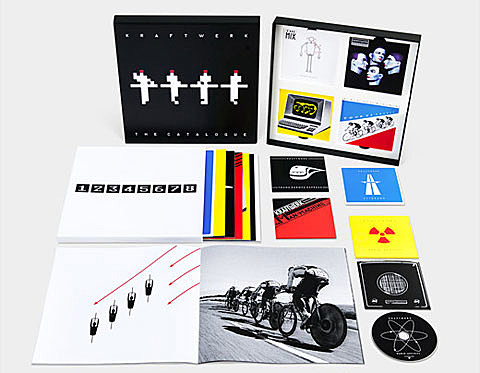 In celebration of the MoMA shows that start TONIGHT (4/10) (maybe you won a ticket?) (or are going to the tribute show at Littlefield instead), here's this entire press release about the boxset (that became available today):

Following their recent mind-blowing performance at this year's Ultra Music Festival in Miami, Kraftwerk are poised to land in New York to perform Kraftwerk-Retrospective 1 2 3 4 5 6 7 8, a truly auspicious and unique series of concerts running April 10 - 17 at New York's Museum of Modern Art. The elaborate staging of the performances will combine sound and 3D images to present more than 40 years of musical and technological innovation, with new improvisations and 3D projections. The albums will be performed in chronological order: Autobahn (1974), Radio-Activity (1975), Trans Europe Express (1977), The Man-Machine (1978), Computer World (1981), Techno Pop (1986), The Mix (1991), and Tour de France (2003).

To commemorate this illustrious moment in Kraftwerk's career, Astralwerks will release a special limited edition version of the 2009 Digital Masters Boxset The Catalogue on April 10. Originally released to celebrate the 35th anniversary of their landmark 1974 hit "Autobahn" and the long-awaited digitally remastered versions of their 8 classic albums, the CD Boxset contains 8 x remastered CDs in 'mini-vinyl' card wallet packaging, plus individual large format booklets. However, this time, the set will come packaged in a black box and will be made available as an individually numbered, worldwide limited edition of 2,000 copies.

This special commemorative edition will be sold at two NYC locations, The Museum Of Modern Art's store in Manhattan and at the MoMA PS1 store in Long Island City. It is also available to purchase online at MoMA's ecommerce store.

Rolling back musical barriers with every forward-thinking phase of their career, Dusseldorf's Zen masters of electronic minimalism laid the foundations for four decades of computerised pop and dance music. By chain reaction and mutation, they have influenced generations of artists in all genres, mapping musical futures yet to come. From Bowie to Daft Punk, Aphex Twin to Portishead, Dr Dre to LCD Soundsystem and almost everyone in between, the mark of Kraftwerk is seemingly without end.

The exhibition is made possible by a partnership with Volkswagen of America.