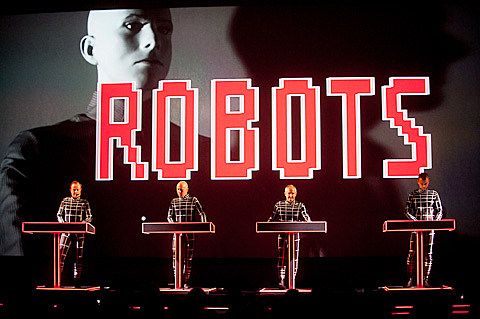 Remeber all the controvery with tickets when Kraftwerk came to NYC earlier this year? It's happening again, but this time in London...

To say Kraftwerk fans were unhappy might be an understatement. "We are livid," said Angela Kennedy, standing at the end of a queue of about 200 people in Tate Modern's chilly Turbine Hall hoping there were still enough tickets. "We got here at the crack of dawn [around 10am] and were turned away - that was after trying on the phone since 7.30am."

Kennedy, style director of Woman & Home magazine, was one of thousands caught up in Tate's ticketing fiasco after the online booking service for Kraftwerk's London gigs, in February, crashed almost immediately at 7.30am. The next option was the phone, which for most people, was constantly engaged... [Guardian]

The shows are happening at London's Tate museum, who issued this statement:

Many people had a difficult time trying to buy tickets for Kraftwerk yesterday, and we apologise unreservedly for that. We had anticipated a significant volume of interest but our website was overwhelmed by the phenomenal number of people attempting to access it simultaneously. This meant the majority of tickets had to be sold over the phone and we apologise for the long wait and frustration this has caused. We believed that our system could cope with the volume so did not appoint a third party ticketing site.

We expected to sell most of the tickets online before the galleries opened and did not anticipate selling tickets in the gallery. Some customers came to Tate Modern and we made the late decision to sell tickets to them to avoid their disappointment. We are sorry that this was not communicated as an official route to buy tickets and subsequently led to more frustration from other customers trying to buy tickets online and by telephone.

All tickets for Kraftwerk have now sold out. Please do not purchase tickets through a secondary sale as we cannot guarantee their authenticity. Access to the events will only be permitted with the credit/debit card used to make the purchase.

Like at MoMA in NYC, Kraftwerk will be performing eight albums at the London museum. Dates are listed below...