Krallice at Saint Vitus in April (more by Fred Pessaro) 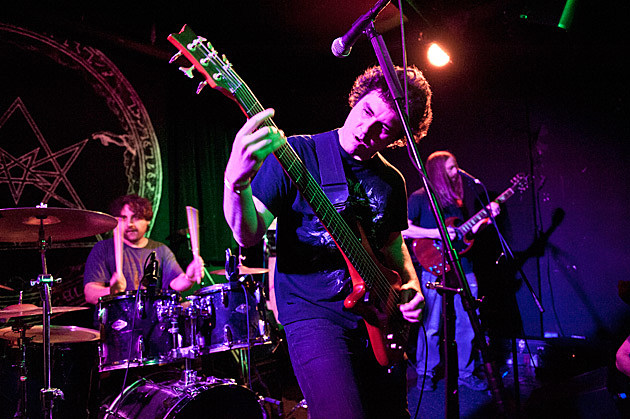 Krallice will play an all-ages event at Public Assembly on July 14, joined by support from Vaura, Psalm Zero (mems Extra Life & Castevet) and MV Carbon. The show is the only Krallice show on deck, and the last show in the back room at Public Assembly until the fall due to upcoming renovatiosn. Tickets are on sale.

In related news, Vaura will enter Colin Marston's studio to record the follow-up to their Selenelion LP. Look for that to surface this fall on Profound Lore.

Vaura frontman Josh Strawn has been busy with personal endeavors, Azar Swan and now another new project Vain Warr. The band, the name of which is derived from Milton's Paradise Lost, are preparing to release a pair of songs via Sacrement. Look for the Sanford Parker-mixed Deadline Season to see the light of day this summer.

Azar Swan isn't slouching either, readying a new single for Pendu's Single Series, and scheduling a local show as well, this time with LA goth-electronic band Bestial Mouths. Look for the pair to team up for a show at Glasslands on July 15. Tickets are on sale, and you can stream some Bestial Mouths material below.