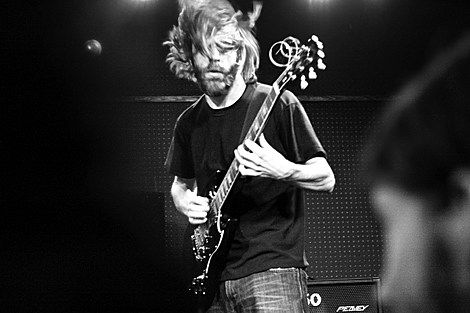 Humanity Falls, Ancient Wound and Crucifist opened for Krallice at the Knitting Factory on Sunday, January 7th, 2010. Crucifist were closing up a short east coast tour in support of the recently released Demon Haunted World, while Krallice dropped Dimensional Bleedthrough a few months ago (one of BBG's faves); both records are out on Profound Lore.

A review of Sunday's show continues below...

Humanity Falls opened the show with a ripping set of chunky, delicious death metal - a style that's definitely underrepresented in NYC. Vocalist Eston B. belted out growls and shrieks in equal form and the band hit a good balance between groove and complexity; the guitar work in particular was outstanding. Great stuff - hopefully we'll see more of them soon.

Next were Ancient Wound, with a decidedly old-school, thrash/black metal sound. Based around simple riffs with a few solos here and there, the music wasn't particularly innovative, but definitely a well-played homage to a long-lost sound. There were songs about conquest, icy triumph and forest trolls - all announced in a dead-pan growl that either completely lacked or was deeply steeped in irony...probably the former.

Crucifist, up next, played classic proto-black metal - Hellhammer, Bathory, etc.; they're similar to Ancient Wound in that they bring back an older genre, without really adding anything new. The whole thing - including the vague corpse-paint and upside-down cross - felt more like well-honed craft than art. Don't get me wrong though; they're fun to watch.

I don't envy bands that are on the same bill as Krallice. It may help draw a crowd, but in the end, it's hard to remember watching anyone else play after they're done. With zero banter and a brief sound-check (have they chilled out or does the Knit just get it right?), Krallice abruptly launched into their set, tore through close to an hour of insanely layered, swirling mayhem, then suddenly stopped and disappeared off-stage. Apparently they've been recording new material and played a few of the songs, sans-vocals.

All in all, Krallice were in great form and infinitely more enjoyable than the last time I saw them, opening for Wolves in the Throne Room. Not sure if it was the set-list, the sound or what, but this show was less about playing calculated, technical songs and more about channeling some completely primordial, raw energy straight out of the ground. My one complaint is that Mick's guitars are never high enough in the mix - you have to strain to pull the melodies out of the sonic barrage. Nevertheless, a great show and a promising glimpse of some new tracks.