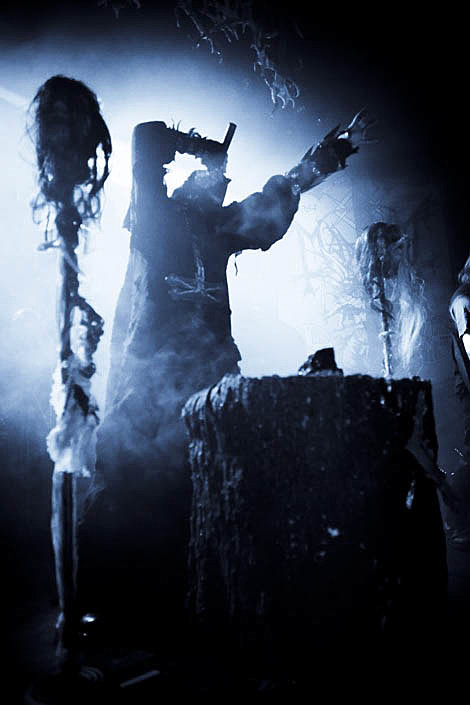 Mayhem. Krallice. Tombs. Ludicra. Each one of these four bands have delivered some of my favorite records and performances of the past few years. And now, all FOUR bands will team up for a tour and a NYC show TOGETHER! BrooklynVegan is beyond proud to present the return of Norwegian black metal legends Mayhem with Ludicra, Krallice, and Tombs at Irving Plaza on April 8th, one show of an overall US campaign to level the musical landscape of all suckas. NYC tickets will be on sale soon. Must.... calm... down..... excitement.... overtaking.....

In addition, we are happy to announce that Tombs honcho Mike Hill will pen a tour diary for BV along the way. You can see his prior dispatches from the road on his website or on Decibel's blog.

Of the participating bands, Ludicra is the only one with a new album imminent; make sure and pick up The Tenant via Profound Lore on 3/2 and dig on an interview that drummer Aesop Dekker did with Brandon Stosuy. Mayhem's last release was 2007's Ordo Ad Chao and both Krallice and Tombs released great LPs in 2009.

Many show going New Yorkers can attest to the greatness of this lineup, as all of these bands have played shows recently. Tombs played Union Pool on 1/22 with Rosetta, City of Ships and Battlefields (pics are on the way). Krallice just decimated the Knit with Crucifist. Ludicra beatdown Santos with John Cobbett's other project, Hammers of Misfortune. And of course Mayhem famously toured sans Marduk, but with Withered, Cephalic Carnage and others. That NYC show was also at Irving Plaza.

Ludicra is one of many bands on board for Scion Rock Fest 2010 in Columbus Ohio. Look for Tombs at SXSW this year.

Some videos of all bands, including a Tombs video from Union Pool, and all tour dates are below...