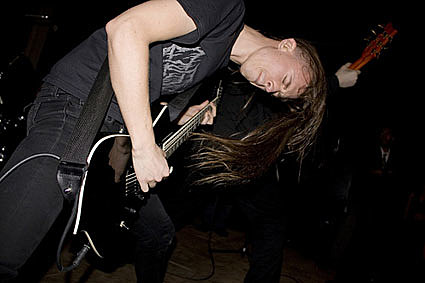 The spazzy noise rock duo Lightning Bolt lined up a Brooklyn show on September 13th with thundering black metal lurkers Krallice. Details are below. Anyone who has ever seen Lightning Bolt knows to expect the following in heaping dumptruck-fuls: extreme volume, unreal riffage, a great big bubble security mirror, insano vocals through a makeshift Lucha Libre mask, and blurry speed-demon fingers/arms as the "Brians" (Chippendale on drums and Gibson on "sort-of" bass) decimate everyone standing on the floor around them (they never perform on the stage). The show on Sept 13th is the first of two New York dates for Lightning Bolt in a month, with the second being their performance at ATP. The band is also in line to play ATP's Release The Bats in London & Birmingham along with a Euopean tour in November.

Lightning Bolt alone should make you feel compelled to go to the Brooklyn show, but the addition of the NYC metal "supergroup" of sorts, Krallice, should solidify it. If you aren't familiar with Krallice, the core of the band is the lightning (sorry) fast pairing of Mick Barr (Ocrilim, Orthrelm) and bassist Colin Marston (Behold... The Arctopus, Dysrhythmia) with Lev Weinstein and Nick McMaster. The band is riding high off of their triumphant self-titled release for Profound Lore, one of my favorite records of the year so far. Catch 'em with LB if you can, otherwise make your way over to the Knitting Factory on Oct 8th when Krallice plays with Withered and the dark lords Watain. Tickets for the show at the Knit are still available.

All LB dates below...