Warning: objects in picture may be older than they appear. Kraut in 1981 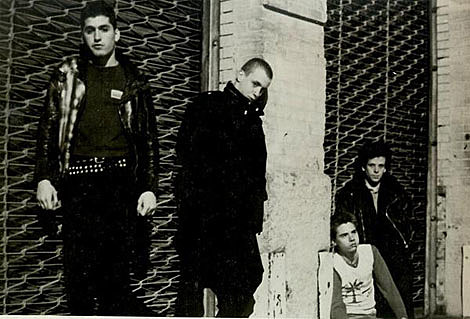 On June 11, 1981, Kraut made their first ever public performance, opening for The Clash at Bonds, and from that point on, theres no turning back. Though young (Johnny 13, Davey 15, Doug 18, and Don 22), they committed themselves to an irreversible course of action... [playing] a club called A-7, Maxs Kansas City, and just about anyplace that could hold a few punks. In August 1981, Kraut released their first single "Kill For Cash" B/W True Colour and Just Cabbage" , the songs from the original demo for The Clash, now re-recorded with the help of Ryk Oakley(producer).... Kraut was working on their first LP [An Adjustment to Society] , and Jones [Steve Jones of Sex Pistols] accepted their invitation to play on 3 cuts... This led [to]... several live appearances with Kraut [and Jones], joining them onstage to close the set with the LP tracks as well as a unbelievable version of " Bodies", Steves favorite Sex Pistols song.
Kraut kept themselves in the public eye by touring the states. Self financed the tour lost money, but kept the band in the public eye. Taking tapes theyd made over the previous... months, they assembled their second album, "Whetting The Scythe". Enigma Records released the album in November 1984. A tour of the west coast with CHANNEL 3 , saw the year in right. But all was not right Doug Holland... wasnt happy with the niche Kraut had carved for itself in the music world... [and left] to join Cro-Mags. ... Chris Smith, formerly of Battalion of Saints [joined] and ...in the Summer 1985 Kraut went back in the studio to finish 4 songs they started before Doug left. ...They were rehearsing for recording their third album when fate took a turn. Chris Smith died in a freak accident slipping in the tub hitting his head and drowning.. - [Kraut Bio]

There have been a few reunions of NYC punks Kraut in recent memory (including last year at Gramercy with HR), but the band will reunite again for an NYC show on 3/27 at Cake Shop with The Krays, YDI, Everyday Dollars, Step 2 Far, and About To Break. Show flyer and some videos are below... 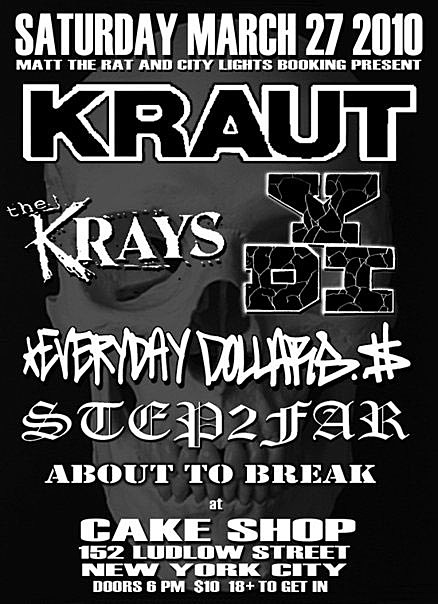