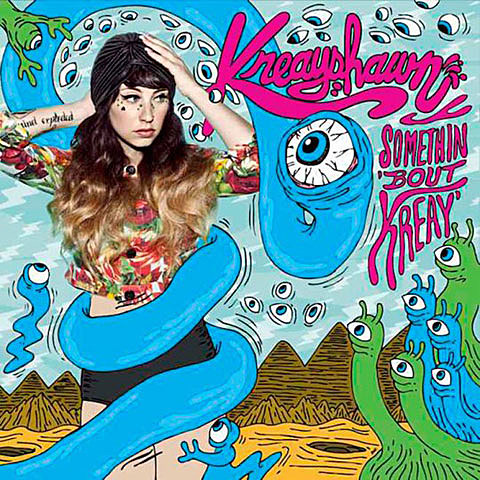 Kreayshawn is set to release her debut album, Somethin 'Bout Kreay, on September 18, instead of August 14 as originally planned, via Columbia and it will feature guest spots from 2 Chainz, Diplo, Sissy Nobby, Kid Cudi, and others. That's the cover art above and you can check out the tracklist below. In support of it she'll be going on the ALL GIRL aka GROUP HUG TOUR with Rye Rye, Honey Cocaine, and Chippy Nonstop. That tour hits NYC on November 15 at Irving Plaza. Tickets for that show are on sale now. The full list of dates is still TBA.

"I went to her Mermaid Ball show in LA because a lot of my homegirls were performing," Kreayshawn said. "She ended up hitting me up a couple of weeks after and said, 'I really wanna publicly apologize,' and I [thought that was] really dope."

"I think it's cool because there's so many girls looking up to everyone that all the beef tears our fans apart," the rapper continued. People feel like, 'I have to be this person's fan and hate on this person.' So I think it shows that you can forgive people, you can apologize to people, you can realize you're wrong and it shows camaraderie for all girls. It's for girl power."

Azealia Banks also hinted at collaboration with Kreay, and wants to throw Angel Haze in the mix too.

Angel Haze, like Azealia Banks, got her start in NYC on a Beggars-related label (Azealia on XL, Angel on True Panther), and she recently announced that she has signed to major label, Universal (Island in the UK), making her labelmates with Azealia Banks. As mentioned, Angel Haze's next NYC show happens on August 29 at SOB's. Tickets for that show are on sale now.

Meanwhile, Azealia Banks' debut LP for Universal, Broke With Expensive Taste, which was supposed to come out this fall, has been pushed back to February, 2013. Check out her recent video for "Van Vogue" off the 1991 EP, which was released in June, below. 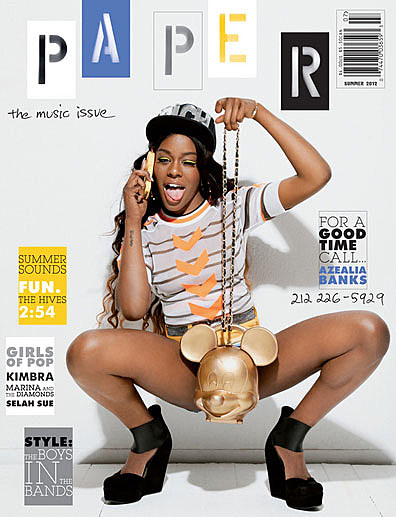 Azealia Banks has also recently made a fan out of Shirley Manson of Garbage (who are reunited with a new album and have been touring all year). In an interview with IFC, Shirley was asked about her opinion on the rise of female rappers:

My favorite out of those is Azealia Banks. The first time I heard "212? I almost died. It felt dangerous and exciting and really fresh and I have a little crush on Kreayshawn, too. But I don't know if those girls are getting time on the radio. It's great that they are getting played via YouTube or Tumblr, but I want them on the radio. Like in the 90s when Missy Elliott was getting played. You know, it's hard out there right now for women with attitude.

Garbage's remaining tour dates, which include some shows with Screaming Females, are over at BV Austin.

Speaking of rappers getting played via YouTube or Tumblr, Kitty Pryde (pictured with Doom above) is on tour and she plays NYC TONIGHT (8/22) at Santos Party House (she hears Andrew WK owns it). Since we last spoke, Lakutis (who also plays as part of a stacked lineup at Glasslands in September) was added to tonight's bill. Tickets for the show are still available.

Also, next week at Santos (8/30) is the next Shortcuts party with Kreayshawn collaborator Riff Raff and Meyhem Lauren (Angel Haze played the last one). Tickets for that show are still available.

LE1F has been added to the upcoming Big Freedia show on a boat. Tickets are still on sale and stay tuned for a ticket contest for this show coming later in another BrooklynVegan post.