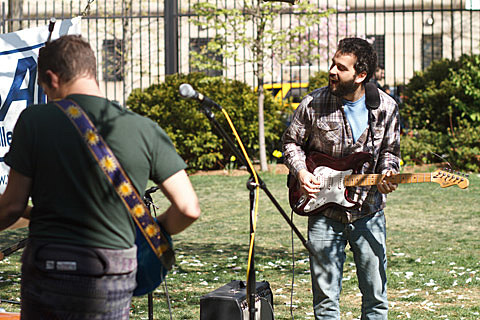 Boston indie rockers Krill put out their new album, Lucky Leaves, earlier this year. It's a fine collection of loud rock songs indebted to the lo-fi of '90s bands like Built to Spill, but with the vocal quirks of someone like Spencer Krug. They've now made a video for its opening track, "Theme From Krill," which you can check out, along with a stream of the whole album, below.

Krill have been doing some shows this year (including a few in NYC) and they've now got a full tour coming up which includes two more NYC shows. The first happens on August 19 at Silent Barn with Advance Base (the current project of Owen Ashworth formerly of Casiotone for the Painfully Alone), Thin Hymns and Frankie Cosmos; and the second is on September 6 at 285 kent with Darlings. They also play a New Brunswick show a day earlier at Cooler Ranch (9/5) with Speedy Ortiz and Aye Nako (we first mentioned the show before Krill was added and the venue was still TBA). All tour dates are listed below.

Krill's September shows will be with new drummer Ian Becker, as regular drummer Luke will be heading overseas to study in London.

Krill frontman Jonah Furman also recently contributed vocals to a Kal Marks song off that band's upcoming new album, Life Is Murder, which is due out September 17 via Exploding In Sound/Sophomore Lounge/Midnight Werewolf. Krill themselves also recently went back to Silent Barn (where they recorded Lucky Leaves) to lay some new tracks down, so stay tuned for that as well.

All dates are listed, along with the new video and LP stream, below...