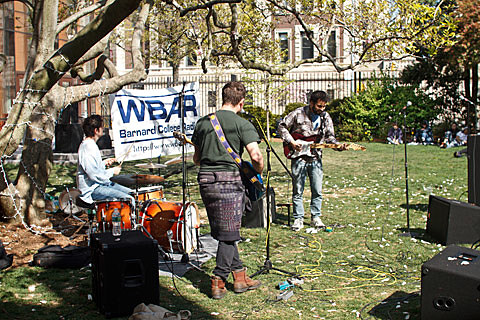 Boston indie rockers Krill were recently in NYC for a few CMJ shows, including the Exploding In Sound Records showcase, and since that showcase, it's been announced that Krill have signed to EIS, who will release their new EP, Steve Hears Pile in Malden and Bursts Into Tears, the followup to this year's Lucky Leaves LP, in early 2014. Congrats to Krill on the signing, and stay tuned for music from that new EP. Meanwhile, if you're not already, you can get familiar with Lucky Leaves by streaming it in full below.

Krill have a few shows coming up at the moment, including a Halloween show tonight (10/31) in their home state, where they'll be "dressing up" as the PIxies. Soon after, they'll return to NYC for a show on November 7 at Death by Audio with EIS labelmates Fat History Month and Palehound, plus mathy Brooklyn indie pop band Celestial Shore. Admission is $7 at the door. All Krill dates are listed, along with the show flyer, below.

For Palehound, the DbA show doubles as a release party for Bent Nail, her excellent new EP of singer/songwriter charm meets noise rock abrasion. Palehound also plays a Halloween show, and hers is in NYC at Cake Shop tonight. She'll be playing as Pavement, along with Vulture Shit as Dookie Shit (aka playing from Green Day's Dookie if that wasn't obvious), Big Ups and Brad Oberhofer doing stoner rock covers as Breaking Brad, Flagland as Weezer, All Nines as Buckingham Buckingham Buckingham, Low Fat Getting High as Nirvana, and Butter the Children as Pixies.

Palehound has other area shows, including one on 11/2 at Sarah Lawrence College with Speedy Ortiz, and another in Brooklyn on November 16 at Muchmore's with Manors, Spook Houses, and Dead Wives. All dates are listed below.

And speaking of Big Ups, who play tonight's Cake Shop show, they recently revealed "Wool," a new track from their upcoming Eighteen Hours of Static LP (due out January 14). Though Big Ups are often known for making chaotic post-hardcore, "Wool" is what they sound like when they hold back a bit and attempt a quieter song. It's not some draggy throwaway though; when I last saw them it was one of the best moments of their set. Listen below. Big Ups' next regular show is the previously discussed Glasslands (11/30) stop on the Hunters / Audacity tour. Tickets for that show are still available.

All lists of dates and song streams below... 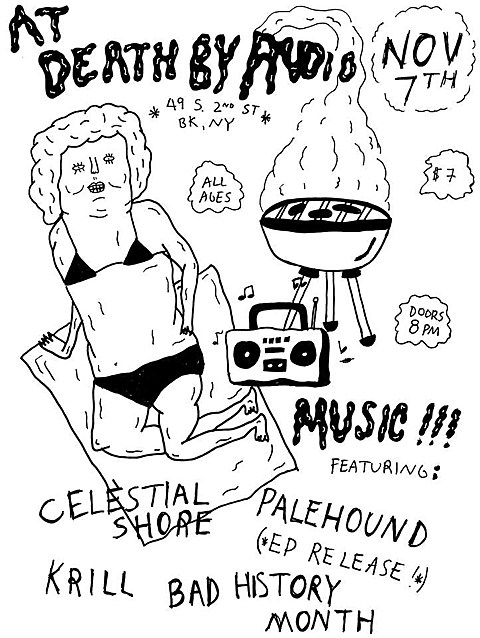