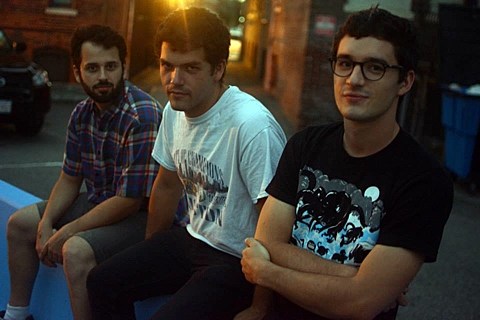 Quirky indie rockers Krill released their newest EP Steve Hears Pile In Malden And Bursts Into Tears earlier this year via Exploding In Sound, and now they're teaming up with two of their labelmates, Ovlov and LVL UP, plus the great Radiator Hospital for a 4-way split due October 14 via Double Double Whammy/Exploding In Sound. Krill's new single "Peanut Butter" appears on the split, and you can check that out below.

Krill also have a ton of tour dates coming up this fall. The tour hits NYC on October 2 at Shea Stadium with Sorority Noise, Told Slant and Pinegrove, and then they return to NYC for CMJ. So far they're playing the official EIS showcase on October 24 at Trash Bar with Ex-Breathers, Lost Boy?, Flagland, Kal Marks, Dirty Dishes, Two Inch Astronaut and Geronimo!; and then they play EIS's unofficial CMJ party/birthday party on October 25 at Silent Barn with more bands TBA. That Trash Bar show's got a great lineup all around, and chances are the Silent Barn one will too. Stay tuned. All of Krill's dates are listed below.

In related news, former Krill drummer Luke Pyenson moved to London for school after leaving the band, and while there he formed a new band, Brunch. Brunch will be coming to the US for a short Northeast tour in the fall which includes a couple of the stops on the Krill tour. They won't be at any of their NYC shows, but they do play NYC the same night as Krill's Shea show on October 2 at Silent Barn with LVL UP, LVL UP's DDW labelmate Mitski, and the Run for Cover-signed chiptuners Crying (whose Elaiza Santos sings on the new LVL UP album). Brunch put out a self-titled EP this past August, and you can stream that with their list of dates below.

Speaking of that LVL UP album, a full stream premiered over at Stereogum. You can also stream that, with the Krill and Brunch streams/dates, below...