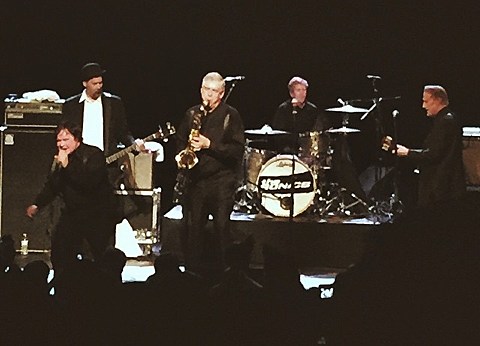 Tacoma, WA garage rock legends The Sonics put out their first new album in almost 50 years last week, and they began their tour in support of it at Seattle's Moore Theater last night (4/2). Special guests were promised, and they turned out to indeed be very special. The band were joined by two fellow Washington musicians, who undoubtedly owe a thing or two to their hometown heroes. Nirvana bassist Krist Novoselic joined for a few songs, including "Cinderalla." And Mark Arm of Mudhoney (who opened the show) sang lead with The Sonics on "Shot Down." Check out videos of those collaborations (via Diffuser.fm) below.

The Sonics' tour rolls into the NYC-area for shows on April 8 at Irving Plaza and April 9 at The Stone Pony. Tickets for both are still on sale. We're also giving away a pair to the NYC show on Facebook.

Updated dates are listed, with the videos, below...