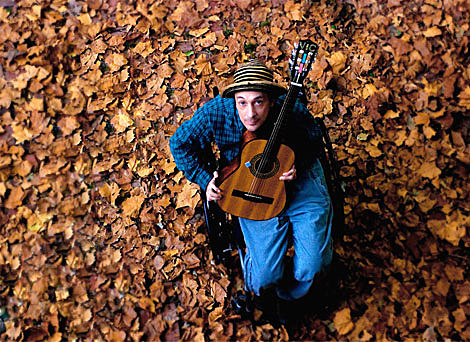 What this man was capable of was superhuman. Vic was brilliant, hilarious and necessary; his songs messages from the ether, uncensored. He developed a guitar style that allowed him to play bass, rhythm and lead in the same song -- this with the movement of only two fingers. His fluid timing was inimitable, his poetry untainted by influences. He was my best friend.

I never saw the wheelchair--it was invisible to me--but he did. When our dressing room was up a flight of stairs, he'd casually tell me that he'd meet me in the bar. When we both contracted the same illness, I told him it was the worst pain I'd ever felt. "I don't feel pain," he said. Of course. I'd forgotten. When I asked him to take a walk down the rain spattered sidewalk with me, he said his hands would get wet. Sitting on stage with him, I would request a song and he'd flip me off, which meant, "This finger won't work today." I saw him as unassailable--huge and wonderful, but I think Vic saw Vic as small, broken. And sad.

I don't know if I'll ever be able to listen to his music again, but I know how vital it is that others hear it. When I got the phone call I'd been dreading for the last fifteen years, I lost my balance. My whole being shifted to the left; I couldn't stand up without careening into the wall and I was freezing cold. I don't think I like this planet without Vic; I swore I would never live here without him. But what he left here is the sound of a life that pushed against its constraints, as all lives should. It's the sound of someone on fire. It makes this planet better.

And if I'm honest with myself, I admit that I still feel like he's here, but free of his constraints. Maybe now he really is huge. Unbroken. And happy.