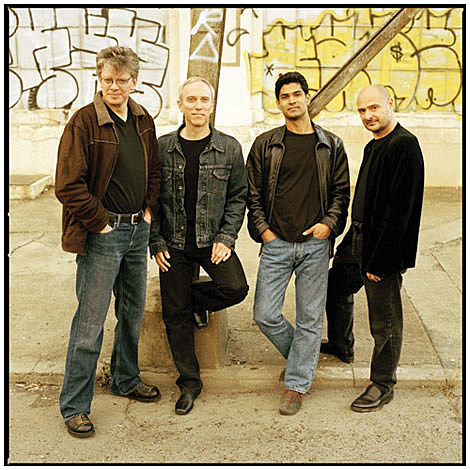 The Kronos Quartet and composer Terry Riley mark 30 years of prolific collaboration, a strong artistic relationship that has resulted in 26 new works. Transylvanian Horn Courtship, which draws inspiration from his legendary Poppy Nogood and the Phantom Band performances in the 1960s, features a set of string instruments with metal horns created especially for Kronos by MacArthur Fellow Walter Kitundu. The program will feature other recent works and commissions for Kronos, including the premiere performance of Another Secret eQuation, for Kronos and the Young People's Chorus of New York City.

The above program, happening tonight (3/11), kicks off Kronos Quartet's four-night run at Carnegie Hall's Zankel Hall. Tickets for all four shows are still on sale. You can hear Riley and Kronos Quartet discuss their collaboration on WNYC's Soundcheck from last Tuesday.

Friday's show is titled "Playing with Toys and Techonology" and features new work by J.G. Thirlwell, collaborations with "toy piano virtuoso Margaret Leng Tan and Portuguese instrument builder Victor Gama," and electronic duo Matmos, who will be performing new piece For Terry Riley with the Quartet.

Saurday night (3/13) Kronos will focus on music from around the Arctic Circle with Inuit throat singing of Tanya Tagaq (who has worked with Bjork and Mike Patton). A video of Kronos founder David Harrington discussing the group's past work with Tanya is below. Also joining will be "the plucked strings of Finnish kantele player Ritva Koistinen, the primitive sounds of the ancient Swedish hurdy gurdy electronically processed by Brisland-Ferner and Mattsson, and the muscular and rhythmic music of Finnish accordion-sampler duo Pohjonen and Kosminen."

The last show on Sunday centers on music from around the Asian continent: "With this program, Kronos travels from the shamanistic performance of Korean artist Dohee Lee, to the varied landscapes and textures created by Afghan rubâb master Homayoun Sakhi, to Alim and Fargana Qasimov's ecstatic spiritual expression of mugam from Azerbaijan." The later two are both featured on Kronos' newest CD, Rainbow: Music Of Central Asia Vol. 8, which comes out on Smithsonian Folkways March 30th.

Terry Riley is the featured artist Big Ears Festival in Knoxville, TN, on March 26-28, and he'll be performing several times at that fest.

More info on Kronos, videos of teh quartet at work and their upcoming schedule are below...

For more than 30 years, the Kronos Quartet--David Harrington, John Sherba (violins), Hank Dutt (viola) and Jeffrey Zeigler (cello)--has pursued a singular artistic vision, combining a spirit of fearless exploration with a commitment to expanding the range and context of the string quartet. In the process, Kronos has become one of the most celebrated and influential groups of our time, performing thousands of concerts worldwide, releasing more than 45 recordings of extraordinary breadth and creativity, collaborating with many of the world's most eclectic composers and performers, and commissioning more than 650 works and arrangements for string quartet.