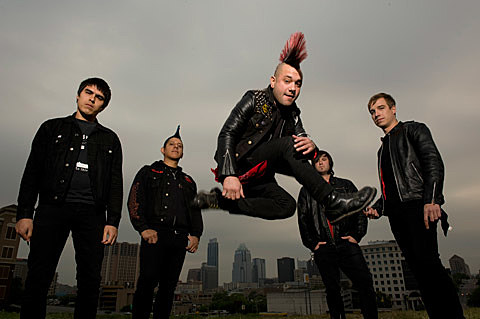 Austin punks Krum Bums are known for their high-voltage live shows, a fact that they will further demonstrate on the unknowing masses heading out to see the NHOBM-y Holy Grail and the crusty-thrashy Toxic Holocaust as part of their tour together. The trio of bands will hit NYC with a right-then-left hook at Europa on August 19th. Tickets are on sale.

The dates are not only in celebration of Toxic Holocaust's new LP, but also Krum Bums' newest release Cut The Noose. Due on August 23rd via People Like You Records, the LP sees the band touching on thrash and metal in their grimy street punk as seen in the title track which makes its debut here. Listen to another track at Metalsucks. Cut The Noose is melodic with out compromising ferocity.

All tour dates, that song stream and some video of a full set from Gilman is below.

Krum Bums Live at the Gilman