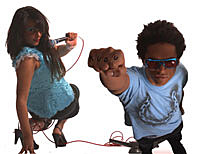 I've started writing posts about KUDU so many times. The only thing harder for me than finishing a post about them, has been actually seeing them live. It's partly because their Tuesday night residency at Nublu happens so freakin' late. The last time I went (after Pelican Picnic) they still weren't on by 1AM so I left. (I think they usually go on by 11 though).

If you don't remember, Nublu gets credit for launching the career of Brazilian Girls. Word on the street is that KUDU will be their next superstars. Two more rumors: They sound like Siouxsie & they're better live than on record.

Sometimes they play other places, like this Saturday (October 1, 2005) when they hit Scenic in honor of the latest issue of Deli Magazine. Other performers at the multiple venue "Alphabet City" event include Ezra Reich, Gym Class, Elodie O, Beat Pharmacy, Die Romantik and The Two Man Gentlemen Band. Get more info and tickets. As usual, I'll miss them.

RELATED
* Pitchfork reviewed a KUDU track
* Coolfer wrote almost the exact same thing I did, but shorter. We even both used the phrase "word on the street." Scary.
* The Village Voice confirms KUDU's hotness with a review of their last show at Scenic