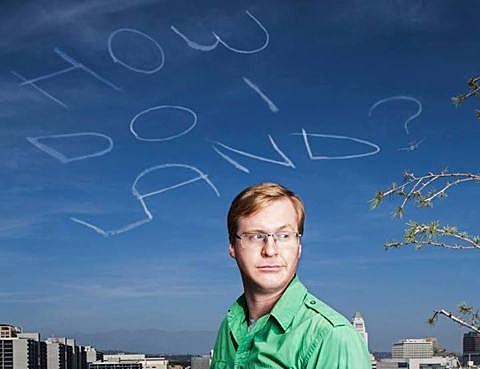 When I first really started getting into the NYC comedy scene, one of the first people to get the Klaus Kinski Gold Pass of Unbridled Greatness was Kurt Braunohler. Back when BV and I started doing our Rock n ROFL shows at Pianos Kurt participated in one of them and absolutely blew the roof off of the place. I remember a lot of people in attendance not really knowing much about Kurt, but when the show was over most of the people there couldn't stop talking about how amazing Kurt was. I initially came across Kurt when I caught him and his comedy partner Kristen Schaal as part of a showcase somewhere; probably UCB or Rififi. Since then I have seen him dozens of times, alone or with Kristen, and he is literally one of the best in the biz. Like so many comedians I love, NYC lost Kurt to the greener pastures of Los Angeles and, man, is that mofo flourishing!

I'd say that the one big thing he did that brought his name into the greater public consciousness was his "how do I land" prank aka "The Cloud Project" in which he raised $6k on Kickstarter and hired a pilot to write the words "How Do I Land?" across the LA sky. It wigged people out and sure enough it hit newspapers, blogs, and news reports from Timbuktu to Portland, Maine -- or Portland, Oregon for that matter. Besides that, Kurt has been a regular on Bob's Burgers and continues to host the weekly comedy variety show "Hot Tub" with his comedy partner Kristen Schaal which packs the house each Monday night in LA just as it did in NY for seven years.

I am beside myself to report that Kurt also recorded an album which comes out on Tuesday August (8/20) via Kill Rock Stars. The album, titled How Do I Land, was recorded earlier this year to totally cram-packed rock clubs in Seattle and Portland. Not only is it Kurt's first release, it's also Kill Rock Star's first comedy signing-slash-release. Right now you can pre-order the sucker, which I highly recommend, because it is without question one of the tightest comedy albums I have heard in an extremely long time.

And I am also beside my besided self to report that Kurt is going to be celebrating the release of How Do I Land with an epic CD Release Party at The Bell House on Tuesday August 27. Not only am I chuffed that he is having this release show in his old stomping grounds of NYC, but I am also chuffed at the caliber of guests that will be joining him that evening. Besides Kurt (already worth the price of admission) the evening also includes sets by Eugene Mirman, Todd Barry, Hannibal Burress, Nick Turner and musical guest Ted Leo. Schwing! Tickets are just about gone, but there will be some at the door.

Footage of Kurt's appearance on Conan last night (8/15), my favorite Vine of all time, and his tour schedule, are below.

"One Of My Favorite Vines Ever" - Klaus Kinski