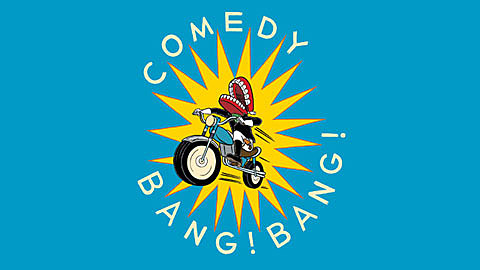 In today's "Oh yeah, that makes total sense" comedy news, it was just announced that Klaus Kinski All Time Favorite Kurt Braunohler has joined the upcoming Comedy Bang! Bang! tour and will be the master of opening ceremonies in New York, Los Angeles, San Francisco, Philadelphia, Washington D.C., Boston, Seattle and Portland (Oregon)(not Maine). Bad news though; the previously announced NYC August 7th show at the Highline Ballroom has sold out. GOOD NEWS though: a late show has been added! Tickets for that 10pm doors / 10:30pm show are on sale now but they are flying off the shelves. Git em! All dates are listed below.

As I mentioned earlier, Comedy Bang! Bang! is not only a superior podcast, but it's also a show on IFC that you can see Friday's at 10/9C. Mr. Braunohler is the host of comedy game show Bunk which you can see on IFC Friday nights at 10:30/9:30C. From an "industry" standpoint, you can see why the pairing makes sense. But from a Klaus Kinski standpoint, it makes sense because Aukerman and Braunohler are hilarious, and have been since waaaayyyyyyyy before their IFC shows. This is a great opportunity to see one of NYC's best share a bill with some of LA's best, and you can be damn sure there will be HELLA surprises and special guests. That's a promise to you, the BV reader, because that's who I am and that's who I care about. Full dates below.

And don't forget, you can see Kurt Braunohler all the freaking time in NYC, provided he is in town. As mentioned, his phenomenal show Night of the Living takes place every so often at Littlefield in Brooklyn. The next installment of Night of the Living takes place Friday June 29th and features Judah Friedlander, music by Amanda Palmer, and a screening of his show Bunk. Inexplicably, $10 tickets are still available. Kurt also co-hosts the great Hot Tub with Kurt and Kristen which takes place Mondays at Littlefield. Hot Tub is SO MUCH fun and offer up an always eclectic roster of awesome guests.

Last month Kurt was a guest at Kevin Allison (of the State)'s show Risk! which goes down at the Pit in NYC. Check out the video below. Risk! happens again tonight (6/28), but this time with guests Mara Wilson, Jamie Lee, Lisa Kirchner, AND Tom Shillue (who tells funny stories) AND Simon Amstell (who we've been stalking since he landed in NYC)!

Tons of local Kurt Braunohler dates, the video of him at Risk!, and all Comedy Bang! Bang! dates, below...