An unseen image of Kurt Cobain at home featured in the film KURT COBAIN: MONTAGE OF HECK © The End of Music, LLC/ courtesy HBO 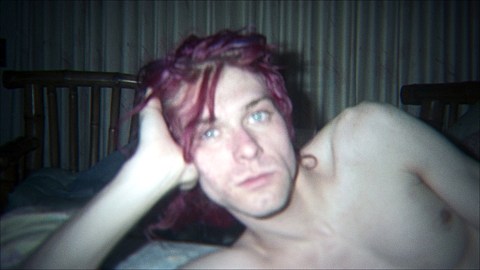 Not only does Dave Grohl have an HBO series, but his former bandmate Kurt Cobain will now be the subject of a new documentary on HBO called Montage of Heck, coming in 2015. They're calling the film, made by filmmaker Brett Morgen (who also did a Rolling Stones documentary for HBO), the "first authorized documentary" on Kurt Cobain. Of course there are several other films on Nirvana and Kurt, but this was the first made with the cooperation of his family, and was also executive produced by his daughter Frances Bean Cobain. The name comes from a mixtape of the same name Kurt made with a cassette recorder around 1988. Here's more info via press release:

"I started work on this project eight years ago," says Morgen. "Like most people, when I started, I figured there would be limited amounts of fresh material to unearth. However, once I stepped into Kurt's archive, I discovered over 200 hours of unreleased music and audio, a vast array of art projects (oil paintings, sculptures), countless hours of never-before-seen home movies, and over 4000 pages of writings that together help paint an intimate portrait of an artist who rarely revealed himself to the media."

No exact premiere date is set at the moment but stay tuned for more info.