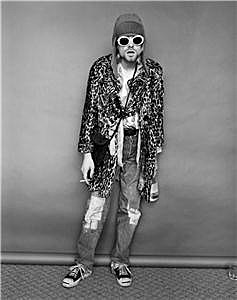 We are very excited to present Jesse's amazing Kurt Cobain photographic collection at our SoHo Gallery on April 5th. While earning a degree in economics at the University of Michigan, Jesse Frohman picked up a camera and never put it down. When he returned to New York, he had no formal training or experience, but he did have a portfolio of platinum prints, which caught the interest of legendary photographer Irving Penn, who hired Jesse to manage his studio.

It was an incomparable apprenticeship. To the techniques and aesthetics he learned from Penn, Jesse added his own sensibilities of strength, dignity and quiet energy, all of which are evident in his pictures.

Jesse has photographed countless celebrities and still lifes. In addition to his work for magazines, advertising, and recording companies, he has been commissioned to create two award-winning books. His work is also in many private collections.

The exhibit will be open to the public from April 6th through Aprol 23rd at the 124 Prince Street gallery.

Jarvis Cocker, Mike Nouveau and others will DJ, along with a live set by the Virgins, at the opening night afterparty at Tribeca Grand, a Grand Life hotel.

Grand Life has an article talks more about the pictures at the gallery (via).

In related news, Courtney Love is planning on auctioning off some paintings made by Kurt Cobain (if she's alllowed), and "Clint Eastwood's 'A Star is Born' Remake is Really About Kurt Cobain" (via).