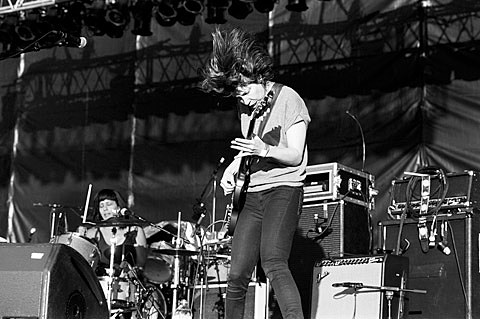 Wild Flag, who just played Williamsburg Waterfront with Sonic Youth, have a tour coming up this fall. When we first announced the tour, we mentioned that it would stop by the NYC area three times for shows happening on The Bell House on October 15, Maxwell's on October 16, and Bowery Ballroom on October 18. If you've noticed that the Bowery Ballroom show mysteriously disappeared from Bowery's site and Ticketmaster, that's because it did. Now that the Waterfront happened, the show back up on Bowery's site and tickets go on sale Wednesday (8/17) at noon. Tickets are also still on sale for the Bell House show and the Maxwell's show. Merge labelmate Eleanor Friedberger provides support on some of the tour including The Bell House show and the Bowery Ballroom show which falls within CMJ.

Wild Flag's tour is in support of their upcoming self titled debut LP, which comes out September 18 via Merge. You can pre-order the album from the Merge webstore now. Also, check out the album trailer video and stream the single "Romance" below.

Eleanor's got other upcoming shows including opening for Deerhunter at Webster Hall on August 22 and 23. The 8/22 show is sold out but tickets for the 8/23 show are still on sale.

In somewhat related news, Kurt Vile, who was also on the Williamsburg Waterfront bill with Sonic Youth, added a show on November 11 at Webster Hall to his fall tour. Tickets for that show go on sale Friday (8/19) with an AmEx pre-sale starting Wednesday (8/17) at noon.

All tour dates, video and song stream below...