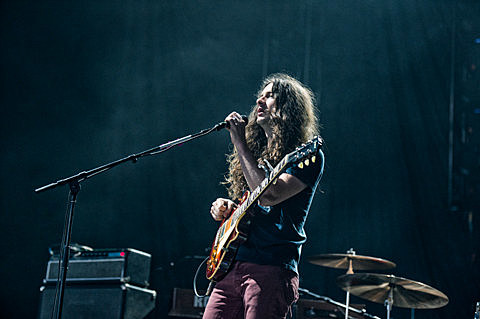 Kurt Vile's followup to 2013's excellent Wakin On A Pretty Daze is gonna be all over the place. Literally -- he's calling the album All Over the Place. UPDATE: Apparently the album does not actually have a title yet.

As for its sound, he told Rolling Stone, "I wanted to get back into the habit of writing a sad song on my couch, with nobody waiting on me. I really wanted it to sound like it's on my couch -- not in a lo-fi way, just more unguarded and vulnerable." The article says it's looking like it's going to be his darkest record yet. And Kurt adds, "It's definitely got that night vibe. KV's Night Life -- it's my sequel to Donald Fagen's The Nightfly."

He's working once again with Warpaint drummer Stella Mozgawa and sound artist Farmer Dave Scher (who were both on Wakin On A Pretty Daze), and it's being produced by Rob Schnapf, who's worked with Elliott Smith, Beck, Richard Thompson, The Anniversary and more. No exact release date, but Kurt says he's hoping to get it out this autumn.

A live video of Kurt playing solo, and his list of upcoming festival dates, below...