Kurt Vile at Bowery Ballroom in May (more by Amanda Hatfield) 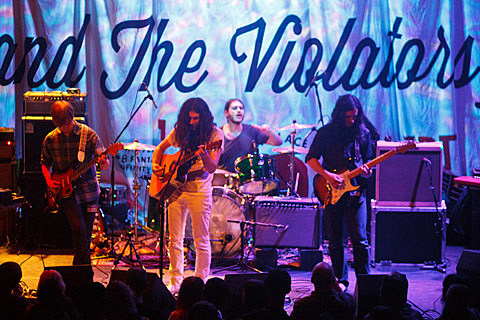 Kurt Vile released his new album, Wakin On A Pretty Daze, this past April. It's a fantastic double album which takes the style he perfected on 2011's Smoke Ring For My Halo to new, ambitious heights without ever overdoing it or dragging. If you haven't listened, I couldn't recommend it enough.

Kurt just released a video for the third single from that album, "KV Crimes." The video was directed by WFMU host Tom Scharpling (who has also directed videos for Ben Gibbard, Nude Beach, and Aimee Mann) and features lots of people clapping, singing along, and waving KV flags as Kurt is paraded through his hometown of Philadelphia. Check it out below.

Philly has also given their hometown hero another honor as well. Matablog reports...

By mayoral decree, August 28 will officially be Kurt Vile Day in Philadelphia! On that date, Kurt will give a free solo performance in City Hall Courtyard at 5:30pm for the season finale of the City Hall Presents summer concert series. Prior to his performance, the City of Philadelphia will present Kurt with the Liberty Bell Award, the highest honor the City can bestow upon one of its citizens. This award is given only to native Philadelphians, and is presented in recognition of outstanding professional achievements and civic generosity.

As mentioned, Kurt Vile will be in NYC for the free 4Knots Music Festival on June 29 which takes place on Pier 17 at South Street Seaport. The rest of that lineup is also great, and includes names like The Men, Parquet Courts, Marnie Stern, Reigning Sound, White Lung, and more. Show starts at 1 PM.

Kurt also recently performed live on KEXP. You can watch a video of that performance, the new music video for "KV Crimes," and the list of updated Kurt Vile dates, below...