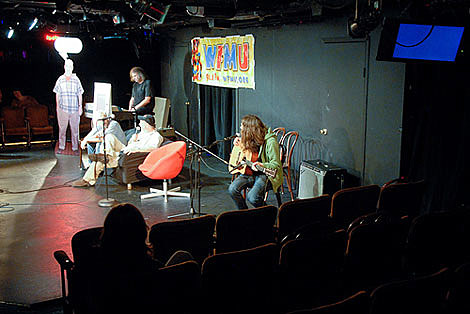 "Kurt opened the night with two solo numbers that haven't appeared on any record, to my knowledge. I recognized "Peeping Tomboy" from one of the Ray Concepcion videos from Kurt Vile's last Silent Barn show, which I've posted below. If I had any doubt that Kurt Vile has any more good material left in him after this new album, "Peeping Tomboy" puts my worries to rest. With the October 6th release of Childish Prodigy, it was no surprise that Kurt Vile and the Violators mostly performed songs from that album. However, he performed a couple of songs off Constant Hitmaker, and they were given the Violators treatment. Of course, KV and the Violators tackled "Freeway," the song that Kurt once referred to as their Billboard chart hit, "right above 'Like a Rolling Stone.'" By far, the live version of "Freeway" is my favorite, mostly due to J Turbo's added harmonica part. No "My Sympathy" this night, but Kurt said he would definitely play it at his next NYC show. I will be there." [LAMIMAB]

That review of from Kurt Vile's show at Mercury Lounge last night (10/7). A few hours earlier he played a set at UCB that was aired live on WFMU (that's where the picture was taken).

Kurt Vile and the Violators are now on tour, but they'll be back soon. They were just added as opener on the November 18th Big Star show at Brooklyn Masonic Temple. Some tickets are still available.

A bunch of videos below...

The Silent Barn: Kurt Vile // Part One from Ray Concepcioñ on Vimeo.