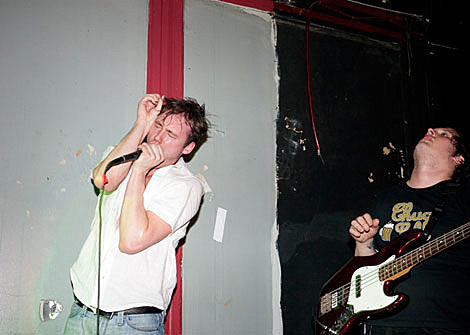 Pissed Jeans played Brooklyn's Market Hotel twice earlier this year - once with Fucked Up on Inauguration Night (January) and again (as you can see above) in April. There's a video of the April gig below.

If 2005's Shallow was Pissed Jeans coping with moving out of their parents' homes, and 2007's Hope for Men their initial reaction to the mechanical lifestyle of a wage-earner, King of Jeans is their formal and uneasy acceptance of adulthood, by way of one hell of a rock record. Working with renowned producer Alex Newport (who holds a Fudge Tunnel pedigree and has worked with such luminaries as At the Drive-In, The Locust and Sepultura), Pissed Jeans have pushed further into the raw, minimal core of heavy rock music with King of Jeans. Masters of the mundane, beasts of the banal, high priests of the humdrum: these four, white, male high school graduates hardly look further than their own appendages for artistic inspiration, content to execute their own brand of brash and heavy punk music in the Joe Carducci-approved standard rock formation of guitar, bass, drums and vocals. From simple minds and simple fabrics comes this King of Jeans. And there can be only one.

Two tracks from King of Jeans are posted above. It's streaming in full at at Spinner.com. Album art and tracklist are below.

Pissed Jeans will be back in NYC on October 7th with Kurt Vile & The Violators and Coconuts. Tickets for the Mercury Lounge show go on sale Friday, August 21st at noon.

That's one of many shows on Vile's packed fall schedule, which is in full below. He'll also be bringing the Violators along for an appearance on WFMU's Brian Turner Show (91.1 FM or online) today (August 18th) at 3pm.

Over the weekend Kurt played shows at both Cake Shop and Silent Barn with Blues Control. Videos from the Silent Barn show, along with all tour dates, album info and videos are below... 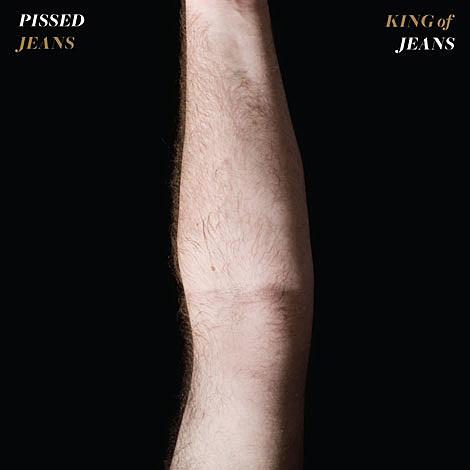