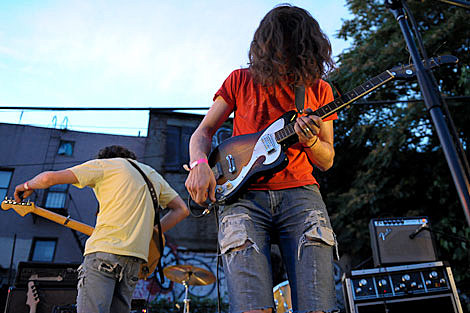 At [D.C.'s] the Black Cat Backstage [Nov. 5th], [Kurt] Vile ambled through the final date of a month of shows with his three-piece band, The Violators, for what he said was the largest crowd he'd played. Double digits, still -- right-sized. He opened the 70-minute set with a solo take of "Peeping Tomboy," which, like so much of the spectral folk side of his songbook, seemed to waft in from some phantom radio. Even when the combo joined him for the stouter stuff -- like "Freak Train," the self-explanatory centerpiece of his just-released "Childish Prodigy" album -- the cacophony was more ethereal than kinetic.

After innumerable self-releases, his songs still sound like their paint's still wet, which is part of their appeal. It remains to be seen whether they can, or should, expand beyond the cult of sober head-nodders who paid their respects last night. The only person dancing was a British girl whose accent was pitched just-so to be perfectly audible through the din.

"They're really quite good," she chirped. Cheers. [Washington Post]

The next show for Kurt Vile and The Violators is a November 17th show at Brooklyn's Europa. Also on the bill are local freaks Wild Yaks and Pink Reason and lyrical post-punks from NJ Home Blitz. Tickets are on sale.

The gig comes one day before Vile opens for Big Star at Brooklyn Masonic Temple (11/8). Tickets to that appear to be gone.

In non-New York news, Vile will be playing a New Year's Eve show at Chicago's The Riviera with The Black Keys. Tickets are on sale. Half of the Black Keys, Dan Auerbach, plays Webster Hall on Wednesday, November 11th.

A flyer for Vile's Europa show and all upcoming tour dates (in which Vile goes to Europe this December) are posted below... 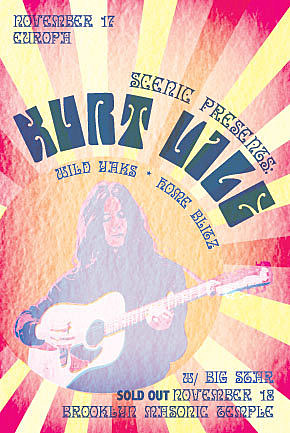