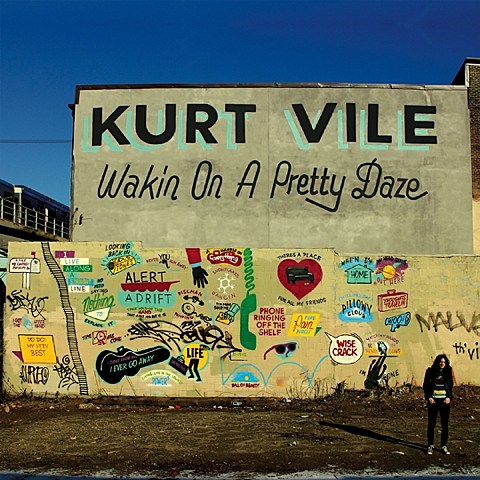 As mentioned, Kurt Vile is releasing his new album, Wakin on a Pretty Daze, this year and since we last spoke, more details on the release have arisen. It's a 69-minute double album and will be out on April 9 via Matador. Like 2011's Smoke Ring for My Halo, it was produced by John Agnello (who also works with Kurt's forefathers, Sonic Youth and Dinosaur Jr). You can download the 9+ minute sort-of-title track, "Wakin On A Pretty Day," at the top of this post or stream it below. It follows in the path of Kurt's cleaned-up sound that he explored on Smoke Ring for My Halo and the subsequent So Outta Reach EP, and if you liked those albums, this new track should be getting you excited for the new album. That's the cover art above and the tracklist is below. You can pre-order the album physically or digitally now.

As mentioned, Kurt will be playing a NYC show this month with Owen at NYU on February 23, and after taking about two months off, he'll head out on a full tour with his backing band, The Violators, which kicks off at Coachella and brings Kurt back to NYC on May 16 at Bowery Ballroom. That show, and many others on the tour, is with Angel Olsen (who we just caught in Chicago) and Steve Gunn. Tickets for the NYC show go on sale Friday (2/15) at noon. All dates are listed below.

Though you'll have to wait until April to get the album in your hands (or you know, on your hard drive), if you're in NYC you can hear it much sooner because BrooklynVegan is presenting a listening party this Tuesday (2/12) at Electric Lady Studios. If you'd like to go, enter via the contest details we've laid out below.

Contest details, song stream, and all dates, below...

Side C:
7. Too Hard
8. Shame Chamber
9. Snowflakes Are Dancing

--
For a chance at winning tickets to the Kurt Vile listening party at Electric Lady Studios: either tweet something that includes both @BrooklynVegan AND "KURT VILE" in the tweet, or send an email to BVCONTESTS@HOTMAIL.COM with the subject line "KURT VILE". Include your first and last name in the email. We'll pick a winner at random and contact them with more details. If you enter by email, it will not be shared with anyone else. Good luck!