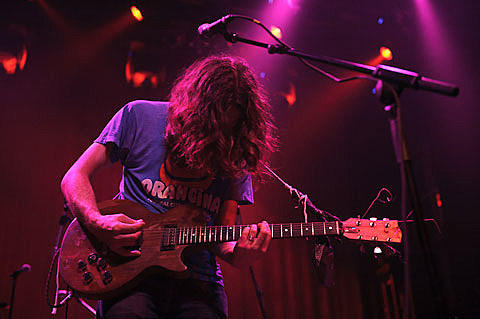 Kurt Vile/Times New Viking/The Clean: That three-band bill looks so good, I'd probably have trouble sleeping the night before such a show came through Vegas. At Matador at 21, it was but the tiniest sliver of a giant, weekend-long musical pie. Beginning at 2:30 p.m. Sunday, the festival's lone matinee event drew a solid crowd to the Palms Ballroom for its first two acts, then packed the place wall to wall for the third.

Kurt Vile, a rising singer/songwriter/guitarist from Philadelphia who's released three albums in two years, kicked off the day's music with his three-piece band, the Violators. The foursome delivered a satisfyingly dense curtain of psychedelically-hued classic-y rock. Really good tunes that sound even better live. If your tastes run toward Springsteen and Neil Young, track down a copy of 2009 Matador disc Childish Prodigy. [Las Vegas Weekly]

Both bands meanwhile have some dates of their own, and Kurt has some shows scheduled after then too. That includes a December 3rd show at Knitting Factory in Brooklyn with Philadelphia;s Purling Hiss (the side project of Birds of Maya's Mike Polizze) who will also be opening the Soft Pack/Kurt dates. Tickets for the Soft Pack-less NYC show are on sale.

The above downloadable Kurt track comes from Kurt's recent Square Shells EP. The Soft Pack one is a song from a limited edition, tour-only 7", titled Gagdad, that you can pick up on their tour with Kurt. The Purling Hiss track is off a new full length called Public Service Announcement being released by Woodsist on October 26th. Full tracklist, the newest Soft Pack video and all dates below...

THE SOFT PACK- "MORE OR LESS" from gia coppola on Vimeo.