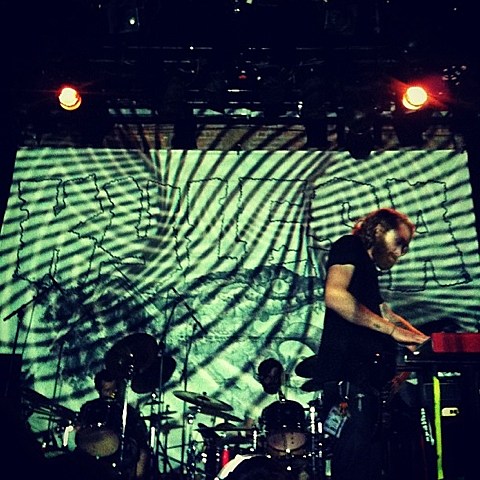 After spending most of my Friday night (6/14) of the Northside Festival at the Invisible Oranges showcase (pictures on the way), I headed over to Music Hall of Williamsburg, which was hosting a pretty like-minded bill, to catch headliners Kylesa. Kylesa's current tour is surrounding the recent release of their psychedelic new album, Ultraviolet, but they've actually only been playing a few cuts off of that, instead choosing to split their set pretty evenly between material from their last five albums. The album that got the most representation was 2009's breakout album, Static Tensions, and they dug even further back to tracks like "Where The Horizon Unfolds" and "Bottom Line" too.

With Kylesa's ever-changing sound, their fanbase is becoming pretty split. Those who prefer the older material were probably happy to see how generous Kylesa were with providing it, but everything that characterizes them as a band today was present at the show too. Phillip Cope is now equipped with a more massive electronic rig than usual, allowing him to throw the band's increasingly drone-y atmospheres into their sludgefest, and their light show is more similar to Tame Impala's than it is to most other metal bands. And with Laura Pleasants singing more than ever before on the new album, she fronted the band at the show as much as Phillip did. Needless to tell anyone who's seen them before, but if you haven't, they totally rip on stage. Not a boring moment the entire show.

Check out some videos and the full setlist from the show below...