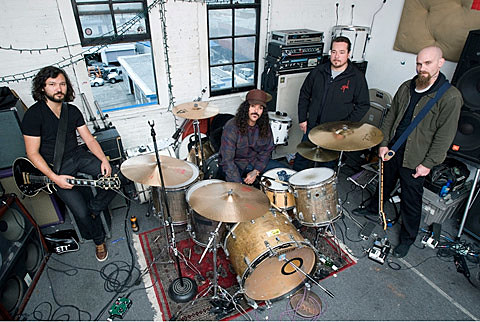 3/4 of Kyuss (no Josh Homme) announced the creation of Kyuss Lives! last year. Original Kyuss members Brant Bjork, John Garcia, and Nick Oliveri, along with guitarist Bruno Fevery, have live dates scheduled this year in Australia, New Zealand, Europe, South America and now North America too. So far it's just two U.S. shows, but more will be announced. One of those is at The Fox Theater in Pomona, CA on October 8th, and the other is at NYC's Terminal 5 on September 23rd (the same venue Queens of the Stone Age recently played). Both Kyuss shows are with The Sword, and tickets for both go on sale this week (Terminal 5 goes on sale Friday).

In semi-related news, stoner-blueshounds Clutch will hit the road with Corrosion of Conformity (Animosity lineup) to play a string of dates together that will include Brooklyn Bowl on 7/20 (tickets go on sale Friday). The following day, Clutch play a solo show aboard the Temptress on 7/21 (a Rocks Off Concert Cruise). Tickets for that show are not yet listed.