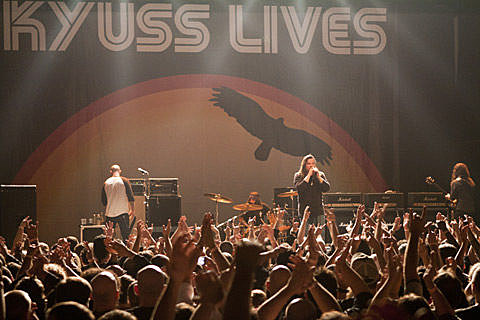 After playing a string of dates through 11/8 with MonstrO including Terminal 5 last weekend, Kyuss Lives! and The Sword will loop back to the NYC area as part of a new string of dates with Black Cobra that will include Long Island at the Paramount Theater on December 9th and Monclair, NJ at Wellmont Theatre on December 10th. All dates are listed below. Presale tickets for all new dates are on sale HERE. Tickets for the Wellmont show go on sale at noon on Friday (9/30). And yes, Nick Oliveri is on board for all dates except when the band hits Canada (and possibly Mexico too?) according to their publicist.

In the meantime, gear up for the Black Cobra show with Invernal, the band's new album due on Southern Lord on 10/11. Check out the new track "Avalanche" at Metalsucks, and preorder it now.

All tour dates and some video from Terminal 5 is below.