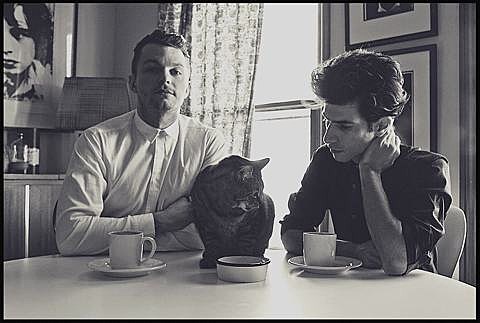 Los Angeles residents Darian Zahedi and Jon Safley began working together as The Refelctions about a year ago, adding bassist Brady Wills to the fold a little while later and have released two singles this far, "Summer Days" and "Disconnected," which are both shimmering, keyboard-kissed pop with a little post-punk drive in there too. The band, who conclude their February residency at LA's The Satellite on Sunday (2/24), are finishing up work on their debut album, Limerence, though Safley is about to be busy playing drums with Bleached on their upcoming tour.

Meanwhile, The Reflections have handed "Disconnected" over to their pals Gardens & Villa to remix. Taking out the driving rhythm section and replacing it with fat synths and a loping beat gives the song an entirely different vibe. It's a great remix and some might argue it makes for a much more distinctive track. Feel free to compare and contrast, we've got the premiere of the remix (and streams of the original singles) below.