La Dispute at the Acheron in 2010 (more by Andrew St. Clair) 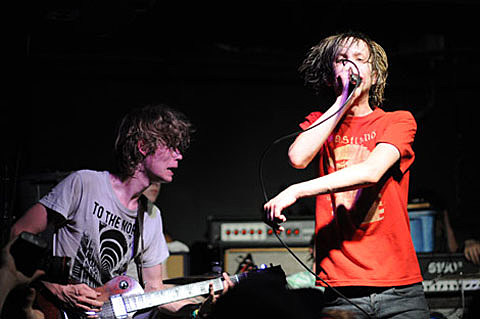 La Dispute's album Wildlife was one of my favorite post-hardcore albums of 2011. You can stream it in its entirety below and pick up the album at the No Sleep webstore.

La Dispute will be going on a headlining tour of the US and Canada in support of it this spring. The tour will be supported by Sainthood Reps, All Get Out, and Balance and Composure. All dates and the tour flier are below.

The tour hits NYC on April 29 at Bowery Ballroom. Artist presale tickets are available now for all dates. Presale tickets come with a poster (pictured below) designed by the band's bassist, Adam Vass. Ticketmaster tickets for the Bowery show go on sale Friday (2/10) at noon with an AmEx presale starting Wednesday (2/8) at noon.

In somewhat related news, La Dispute's friends Pianos Become The Teeth have a few upcoming shows including two in NYC. They open for post-rockers Caspian at The Studio at Webster Hall on February 24 with Tidal Arms and also open for Converge at MHOW on April 14 with Git Some. Tickets for the Studio show are on sale now and tickets for the MHOW show go on sale Friday (2/10) at noon with an AmEx presale starting Wednesday (2/8) at noon.

All dates, album stream, flier, and poster below...