La Dispute @ the Acheron in 2010 (more by Samantha Marble) 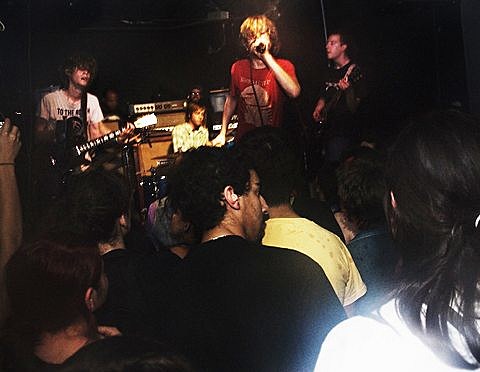 Sound and Fury Fest, notoriously shut down after a riot last year, returns this year and takes place in the Earl Warren Showgrounds in Santa Barbara, CA from July 22-24. The lineup consists of several hardcore and metal bands including Defeater, Burning Love, and Deafheaven, who all have upcoming NYC shows.

Tourmates Defeater and La Dispute play The Studio tonight (5/24), after having played Krazy Fest this past weekend. Tickets are still on sale if you need some last minute hadcore plans. You can read about the 5/20 show at Altar Bar at 'A Brief Intermission'...

"...One thing is for sure, La Dispute do not lack energy. Dreyer and company rarely stayed still, and that energy was reciprocated enthusiastically by the crowd. They played a set full of great songs from their incredible full length, Somewhere at the Bottom of the River Between Vega and Altair, including the crowd favorite "The Castle Builders," in which, to the fans delight, they considerably slowed down the ending sing-along. They also played both songs from their split with Touche Amore, which translated into incredible live songs and were certainly favorites of the crowd.

Meanwhile Touche Amore are touring ferociously in support of their upcoming sophomore album Parting the Sea Between Brightness and Me which will be released June 7 via Deathwish. Their 3+ month tour includes the previously announced Santos Party House show on June 24 with Title Fight, The Menzingers, and Dead End Path (tickets). Touche also head out on a European leg with La Dispute. All dates are listed below.

Touche Amore's Deathwish labelmates Deafheaven play Cake Shop on June 17 with Gholas. As mentioned, KEN Mode unfortunately dropped off the show, though they will still appear on other dates of the tour. An updated list is below.

Burning Love open for Converge and Trap Them Wednesday (5/25) at the sold out Santos Party House, and at other dates which are listed below. La Dispute opened for Trap Them at the Acheron in 2010.