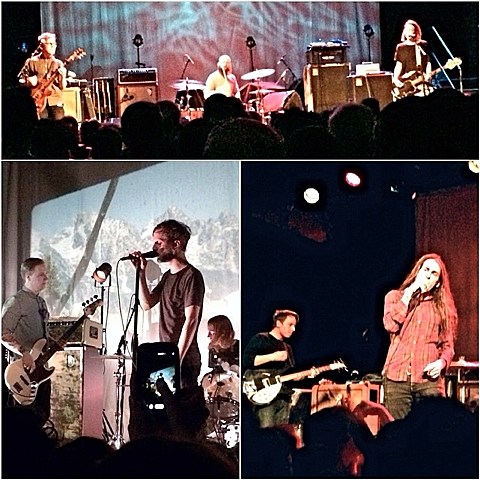 Though it hardly feels like it anymore thanks to "Nirvana," there were other shows happening in NYC last night (4/10), including the sold-out Music Hall of Williamsburg stop of La Dispute's tour with Pianos Become the Teeth and Mansions. I arrived there about halfway through Mansions, whose grungy power pop was sounding pretty good last night. I like them on record, but sometimes it's a little polished for my taste and I thought they really benefited from the absence of studio shine in a live setting.

Up next were Pianos Become the Teeth, who I've caught a couple times before but last night's show was easily the best I've seen of theirs. As much post-rock as they are post-hardcore, Pianos are an intense band to watch even if moshing and rushing the stage aren't your thing. Last night they previewed some material from an upcoming album (details TBA) which had vocalist Kyle Durfey singing as opposed to the harsher screams of their earlier material, not unlike he did on "Hiding" from their 2013 split with Touche Amore. The new stuff sounded great and "Hiding" had the crowd shouting along louder than any other song. Keep an eye on the new stuff from these guys.

Finally La Dispute took the stage, and though the venue had been full all night and each band definitely had fans in the room, they clearly felt like the "headliners" (which is still kind of amazing considering it wasn't long ago they played that same venue as openers for Hot Water Music). They've earned it though. La Dispute are an ever-evolving band who have cut their teeth relentlessly touring for years, and their newest Rooms of the House LP has some of their strongest material yet. The band mostly stuck to songs off that album, and though the new songs are less likely to induce moshing/screaming along, when the old favorites did come they actually felt overshadowed by the band's new direction. (Not that the crowd didn't freak out for "Andria" and "Said the King to the River.") And as with most post-Wildlife La Dispute shows, set-closer "King Park" remains a highly emotional live-show moment that still few of their peers are capable of.

La Dispute's setlist from MHOW and a video of "Woman (Reading)" from their Toronto show three days earlier, below...

La Dispute at Music Hall of Williamsburg - 4/10/14 Setlist:
HUDSONVILLE, MI 1956
First Reactions After Falling Through the Ice
The Most Beautiful Bitter Fruit
Stay Happy There
St. Paul Missionary Baptist Church Blues
Woman (In Mirror)
a Letter
Andria
For Mayor in Splitsville
All Our Bruised Bodies and the Whole Heart Shrinks
THE CHILD WE LOST 1963
a Poem
New Storms for Older Lovers
Said the King to the River
Woman (Reading)
You and I in Unison