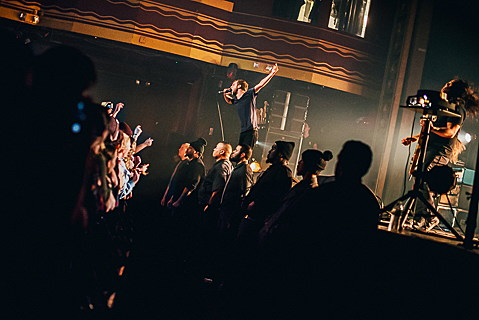 How did the band pick "Polly"?

La Dispute's Adam Vass: We had the option to do whatever Nirvana track we wanted, and it was daunting, because they have such a long list of really cool songs, and there was the initial struggle of deciding between a more popular song or a deeper cut that someone who only listens to the radio wouldn't have heard, and there are so many songs, and so many of them are good, we decided that "Polly" was the average between a deep cut and a popular radio song. And it's a pretty heavy song, thematically, which is something that our band is no stranger to dealing with, and with "Polly" being about a kidnapping and molestation, it was maybe a little bit farther than where we usually go, but we wanted to pick a song we could make a bit more vibe-y. The initial track is dark, and we tried to give a bit more life to it, which was a fun experiment. [AllMusic]

Last week we heard Nothing's cover of "Something In the Way" from the upcoming Nirvana tribute, Whatever Nevermind (due 4/18 via Robotic Empire), and today we get La Dispute's cover of "Polly." Like the Nothing cover, La Dispute choose to keep it sounding like themselves rather than doing a Nirvana impression. The melody is unchanged, but the arrangements don't mimic the original (or even the New Wave version). Listen below.

La Dispute were last in NYC with Title Fight and The Hotelier in late March. If you missed it, check out our pictures and review.