Barclays Center, night of The Weeknd (more by Gretchen Robinette) 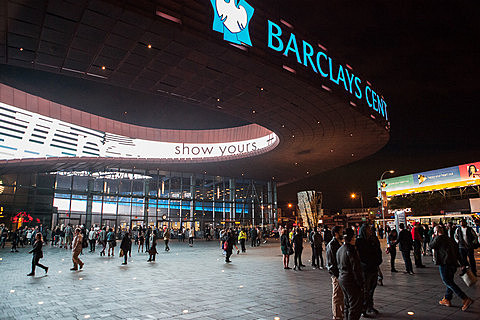 The venue for next week's Judas Priest show may have a new owner soon. The NY Post reports:

Brooklyn's former and current teams are close to teaming up.

Guggenheim Sports and Entertainment, which owns the LA Dodgers, is in talks with the Brooklyn Nets about a "combination of assets."

The proposed deal would include both the Nets and the 2-year-old Barclays Center, according to a report.

Guggenheim, which bought the Dodgers in March 2012 for $2.15 billion, the highest price ever paid for a Major League Baseball team, is valuing the Nets at $1.7 billion and the arena at $1.1 billion, NBA league sources told The Post.

That's a pricey sum for the Nets -- about 20 percent more than the team would fetch if they were sold on the open market, one sports banker said.

Guggenheim is offering the premium to pre-empt any auction for the whole team and arena, the banker said.

Nets owner Mikhail Prokhorov, the Russian billionaire, is expected to remain in control of the Nets, according to Nets Daily, the website, which first reported the talks.

Bruce Ratner, who controls Barclays Center, would retain that same control after the deal, if it is completed, according to the report.

We just caught The Black Keys and The Weeknd there.