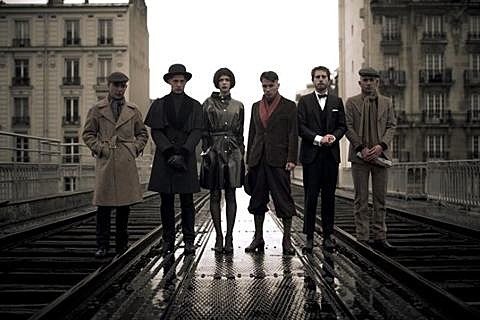 La Femme's Psycho Tropical Berlin was in a three-way tie for first in my Best Albums of 2013 (though I officially ranked it #3) and I continue to listen to it a lot. I wrote:

The title of Parisian band La Femme's debut album, Psycho Tropical Berlin, is a pretty good summation of what to expect: crazed psychedelic pop with a krautrock/coldwave backbone and an affinity for surf rock. Add to that the inherent French element (Ye-Ye enthusiasm and smoky Gainsbourg cool), you get an inventive, modern, highly entertaining album, unlike anything anything else I heard this year.

The band are still putting together their upcoming North American tour that includes visits to Austin for SXSW and Psych Fest and I'm tickled pink to announce that BrooklynVegan will be presenting La Femme's March 23 NYC appearance at Glasslands. Openers are to be announced, but tickets go on sale Friday (1/10) at 10AM.