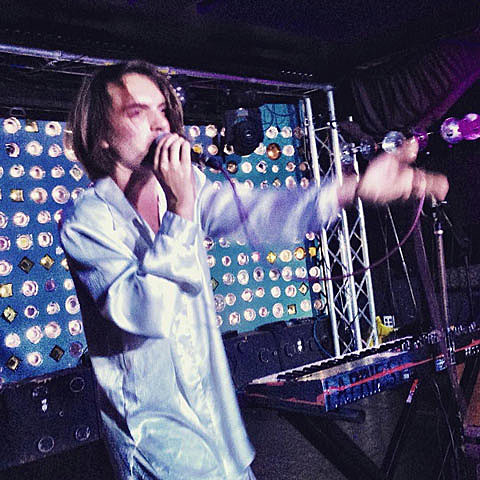 LA Priest, aka onetime Late of the Pier frontman Sam Dust, played his first NYC show on Wednesday night (9/30), part of his North American tour. Dressed in white satin pajamas, Dust was solo onstage, using some sort of homemade-looking drum machine / sampler / sequencer for most of his backing, with occasional use of guitar and a keyboard. It was pretty effective, despite Dust saying his voice was shot and he couldn't hit all the falsettos (but he mostly did), and the crowd was definitely into it. He sampled the audience, actually, for the last number which got warped into the beat which he let play while he jumped off stage and danced with fans. A short but fun set.

It will be curious to see how this act translates to somewhere bigger, like when he opens for Tame Impala in Philadelphia and NYC next week. There are still a few tickets for the 10/6 Radio City Music Hall show, but Terminal 5 (10/7) is sold out.

Check out a few LA Priest music videos below.