photo: La Sera at Baby's All Right in 2014 (more by Amanda Hatfield) 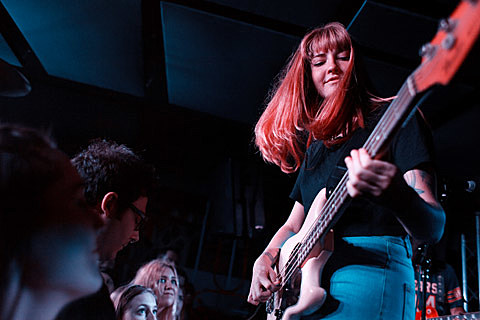 Former Vivian Girl Katy Goodman announced last year that she's releasing La Sera's forthcoming album, Music for Listening to Music To, on March 4 via Polyvinyl and released the first single "High Notes." Today she shared the music video for it, featuring La Sera in a '60s variety show with a backdrop of a ranch...along with some unexpected creatures. Watch it below.

La Sera were also added to this year's Noise Pop Festival lineup and are heading on a short tour in May, which stops by NYC for a show at the newly-reopened Market Hotel on May 11. That's Katy's old stomping grounds, where Vivian Girls used to rent a room and practice, as well as playing a few shows there back in the day. Tickets for the Market Hotel show go on sale Friday (1/29) at noon.

In other Katy Goodman/Vivian Girls news, Katy reunited with her former Vivian Girls bandmate Ali Koehler in SNL castmember Aidy Bryant's short film Darby Forever, in which Aidy's character, a fabric store clerk, fantasizes about being a rockstar. Katy and Ali also co-wrote a song for the film with Aidy called "I'm a Bitch." It comes out on February 16 on Vimeo on Demand. Watch the trailer below.

All La Sera tour dates are listed, along with the video for "High Notes," below...