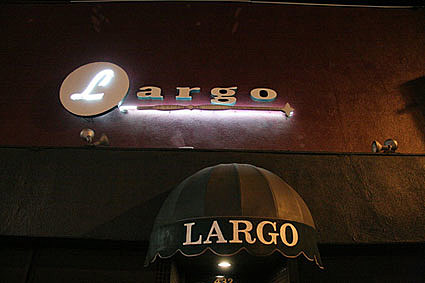 Largo, which will shutter its 120-seat Fairfax Avenue location after a final comedy show Monday (May 5th), will open June 2 at the Coronet Theater space on La Cienega. Aimee Mann, who will release an album June 3, will be the first performer.

The Conga Room, which presented Latin artists for 8½ years in a mid-Wilshire location before closing in May 2006, has Nov. 14 circled for its opening in the L.A. Live complex across the courtyard from the Nokia Theater. Jimmy Smits, Jennifer Lopez, Paul Rodriguez and Sheila E. are still among the co-owners of the venue, which will boast a 1,000-capacity club and a 100-seat restaurant in addition to a VIP lounge. [Variety]

Photos from Largo's final Fairfax night can be seen on Flickr.