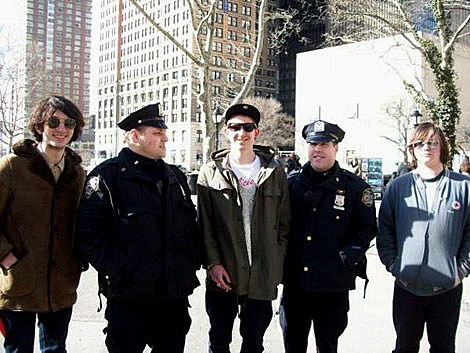 Two of UK label Stolen Recordings' best bands will be here next week for CMJ: Let's Wrestle and Pete & the Pirates. Both are playing The Bell House Wednesday night (10/21) as part of a pretty killer line-up that also includes New Zealand's great Surf City and Chicago's The Love Language. While the Bell House is far from the Lower East Side heart of the CMJ action, there's enough good bands on this bill that it would be hard to feel like you're missing out on anything better.

Maybe you saw Let's Wrestle back in March when they played NYC right before SXSW. Their debut album, In the Court of Wrestling Let's, came out earlier this year and is charmingly shambolic, full of catchy songs and self-deprecating humor. They were the last band I saw at SXSW which was a great way to close out the festival.

Pete and the Pirates 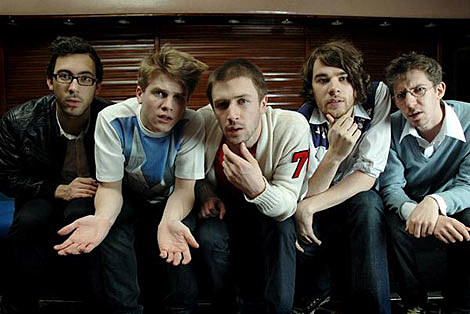 Pete & the Pirates, however, topped my list of SXSW 2009 favorites:

Easily the best band I saw at SxSW this year. Of course, as their album Little Death made my Best of 2008, I already had a predilection to like them but Pete and the Pirates so nailed their great songs live -- the harmonies, the guitar interplay, everything -- that I just had a big grin on my face the whole time. My only regret: not seeing them more than once.

And what I wrote about their album, Little Death:

I can't quite put my finger on who Pete and the Pirates remind me of -- the Bats? Billy Bragg? Somewhere in between? -- but I can't get their songs out of my head. Spot-on harmonies, jaunty melodies, nice arrangements, funny-sad-literate lyrics, and great song after great song.

Pete & the Pirates are putting the finishing touches on the follow-up to Little Death, but if you're a fan and are in the need of new songs, frontman Tom Sanders also has a solo project, Tap Tap, which just released its second album, On My Way, which is also very good. I'm not really sure what differentiates the two, but as long as there are enough songs to go around I don't care.

In addition to the Wednesday Bell House show, both Pete & the Pirates and Let's Wrestle will be playing unofficial shows during CMJ as well. Pete & the Pirates, along with Surf City, are playing the free BrooklynVegan/Bowery Presents party at Pianos on the afternoon of Saturday, October 24th (full details TBA). All dates for both, as they stand right now, plus some videos, are below.

Let's Wrestle - "We Are The Men You'll Grow To Love Soon"